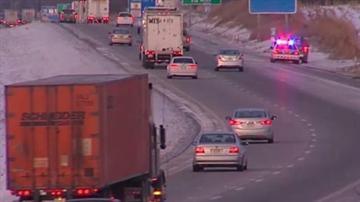 (CNN) -- In multiple 911 calls shortly before he was killed, a man said he was being chased by an enraged motorist -- right up to when he was apparently run off the road in Pennsylvania and then shot to death, police said Friday.

Timothy Davison, 28, was driving home to Maine along Interstate 81 early last Saturday when he was shot multiple times and killed in Antrim Township.

So far, there is no indication that Davison initiated the incident or provoked the shooter, Pennsylvania State Police Capt. Steven Junkin told reporters Friday.

Davison may have first encountered the shooter on Interstate 70 in Maryland and traveled between 13 and 15 miles, with the gunman in pursuit, before being forced off the road just beyond the Pennsylvania state line, authorities said.

Junkin said Davison called 911 from Maryland and Pennsylvania, but he declined to provide details. Authorities have not released the contents of those 911 calls, citing the ongoing investigation.

A task force made up of Maryland, Pennsylvania and West Virginia state police, as well as FBI agents, is seeking help from the public and operators of body shops in finding a \"dark colored\" Ford Ranger XLT pickup with damage on the driver's side from ramming into Davison's car.

\"How concerned are we that it'll happen again?\" Junkin asked. \"We obviously have an individual out there who was so incensed that he continued to pursue Mr. Davison and took it to that next step. He murdered an individual for whatever slight that he perceived. Will this person do it again? We don't know. We don't want to take that chance.\"

The Maine resident ended up shot multiple times, a death that authorities have ruled a homicide.

Investigators initially believed the same motorist may have been behind another road rage shooting eight hours earlier and 56 miles northeast, but Junkin said Friday that the two crimes do not appear to be related.

James Allocca, Davison's uncle, told CNN this week that the family \"wants justice before someone else gets hurt.\"

The victim's father, Timothy Davison Sr., said he learned about his son's death when police arrived at his door Saturday.

He went to Pennsylvania on Tuesday to collect his son's personal belongings.

\"He cared for everyone around him,\" he said. \"He was a rugged kid, extremely sensitive.\"

He said he hoped to meet his son's killer. Asked what he would say, Davison said: \"That is for me.\"

\"There are different levels of loss,\" Allocca said. \"This has to be the worst.\"