Police: Missouri gunman kills 7 in town of 50 then himself; was cousin to 2 slain couples 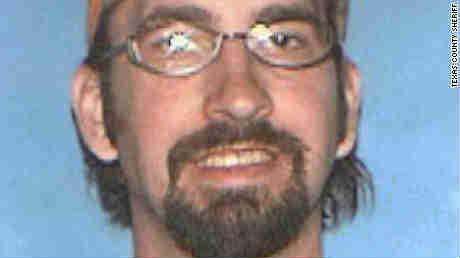 (CNN)A small Missouri town's discovery that a gunman killed seven people and injured another Thursday night began when a girl managed to flee a residence where she heard gunfire.

She ran to a neighbor's house and called police, say investigators in Tyrone, Missouri.

Authorities then found a trail of death that was so staggering, a state trooper lost count at a news conference.

Seven people, all gunshot victims, were found dead in four residences in the small town of 50 people. One person managed to survive, and she was found wounded in one of the homes.

The gunman also was found dead Friday morning in a GMC pickup after going to another county more than 15 miles away, where he apparently shot himself. He was identified Friday as Joseph Jesse Aldridge, 36, who was believed to be a cousin to four of the seven slain victims, the Missouri State Highway Patrol said.

And, in a twist to their probe, investigators happened upon another body -- that of an elderly woman -- in a fifth home, though it appears that she died of natural causes, authorities said.

That person turned out to be the gunman's mother, Alice L. Aldridge, 74, and a post-mortem exam will be performed Saturday on her body, authorities said.

It was unclear Friday whether her death was connected to the case, Missouri State Highway Patrol Sgt. Jeff Kinder said.

The gunman's finding his mother dead could be a motive, \"but it would speculation for us to say that is the case,\" Kinder told CNN. \"We're examining of a lot of different avenues now.\"

The gunman \"had been (living) with her for quite some time,\" said Texas County, Missouri, Sheriff James Sigman.

The shooter didn't leave a note, so investigators are asking family and neighbors about a possible motive, the sheriff said.

In all, nine of the town's approximate 50 residents were found dead or killed overnight, nearly decimating the town twice over, according to authorities.

There were a total of six police scenes: Three had two bodies each. Two had one body each. And then there was the site where the suspect apparently committed suicide.

\"Everybody is in disbelief now,\" Kinder said. \"They're shocked. They will all just have to take care of each other. But it has just shocked this community to its core, and we will just have to work our way through it.\"

Among the seven slain gunshot victims were two married couples, who were described as cousins of the gunman, authorities said.

All victims lived within a three-mile radius of each other, authorities said.

The other three victims weren't identified pending notification of their relatives. They weren't from the same family, the sheriff said.

Everyone surely knew each other, the sheriff said.

\"It is a small community out there. Everybody knows everybody, but as far as what their personal relationship is ... I couldn't tell you,\" the sheriff said. \"Crime like this in any community is pretty major.\"

\"We obtained part of our information from her,\" Sheriff Sigman said. \"As far as I know, she's expected to be okay.\"

In summarizing the crime, Kinder momentarily lost track of the death toll at a news conference.

\"There are ... isn't that terrible? Lose count. There is actually nine total victims here in this case,\" he told reporters.

The carnage was overwhelming, he added.

\"In our job, we see a lot of bad stuff, and this is bad,\" Kinder said. \"This is also hard on the police officers who are working out there. It's not natural to see that sort of thing.\"

The juvenile girl whose police call exposed the mass deaths had been in a residence where two bodies were later found, Kinder said.

Authorities also don't yet know the relationship between the girl and those two deceased victims, Kinder said.

\"I don't have any information that would confirm any of that other than she was at the residence at the time it started,\" he said.

Missouri Gov. Jay Nixon said the state was ensuring that mental health counselors and crisis intervention services would be provided to students in the area and other residents.

\"This is a horrific tragedy, and our hearts go out to the victims of these senseless acts and their families,\" he said.

The shootings happened in Texas County, home to about 26,000 people.

After police found two bodies in the first residence, investigators found five more bodies and an injured person in three other Tyrone homes, according to Kinder.

The elderly woman who's believed to have died of natural causes was found in a fifth residence after \"investigators were somehow led to that residence after this was all placed in motion,\" he said.

The suspect's body was found in a vehicle in neighboring Shannon County, Kinder said.

It wasn't immediately clear if any of the victims were of school age, but news of the deaths has shaken the community, the superintendent of the area's schools said Friday.

\"There is a lot of speculation right now, and we just don't have the information. The area is within the school district; these are my families,\" said Scott Dill, superintendent of the Houston R-1 School District. \"We run buses out there daily.\"

Classes for the district's 1,000 students are in session Friday, in part to give them a sense of normalcy, he said.

\"We do have counselors available, and other offers from other districts to help out. As a small town, we all cry together. My principals are all assessing the situation now, and we will make a determination on what to do next,\" Dill said.
Share this article: