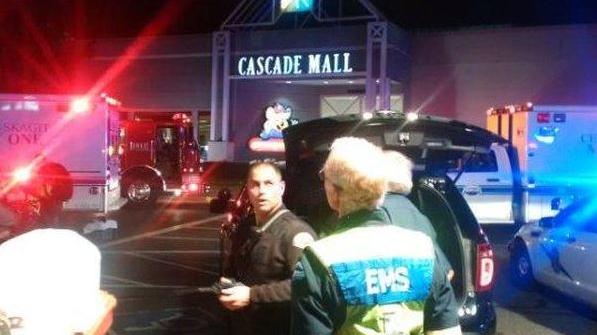 BURLINGTON, WASH. (CBSNEWS) Troopers on Saturday night have a suspect in custody in the fatal shooting of five people at the Cascade Mall 24 hours earlier, the Washington State Patrol tweeted.

The suspect fled the Cascade Mall after the deadly shooting at Macy’s. The motive is still not yet known.

Authorities said four women, ranging in age from teens to seniors, died Friday. A man who was wounded in the shooting died early Saturday, officials said. The victims have yet to be identified.

The mall was packed Friday night when opened fire, and victims described chaos on the scene as police locked it down and tried to clear the area.

Stephanie Bose, an assistant general manager at Johnny Carino’s Italian restaurant near the Macy’s store at the mall, said she immediately locked the doors after hearing about the shooting from an employee’s boyfriend.

“He was trying to go to the mall and people were screaming,” she told The Associated Press. “It was frantic.”

She said he could see police at the doors with assault rifles.

It took hours for teams to search the 434,000-square-foot mall late Friday night. They escorted shoppers and workers who had sheltered in place outside.

“It took several hundred to do that...clearing every room, to make sure the suspect wasn’t still on the scene,” Cammock said.

The parking lot was closed and emergency management officials told people they would be able to retrieve vehicles Saturday, though the mall said it would be closed for the day.