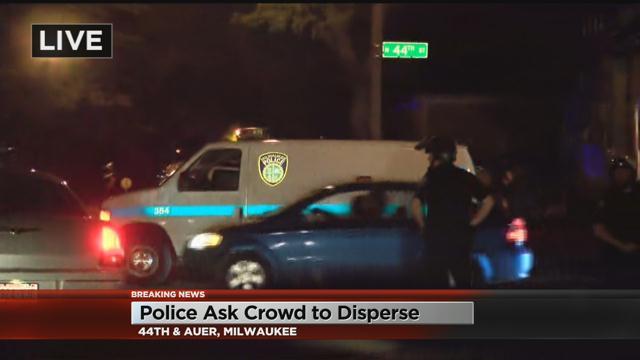 As of 10 p.m. Tuesday night, Milwaukee Police made 10 arrests near N. 44th and Auer Streets.

They say they were called to the area by residents. A crowd of 30-40 people gathered in the area Tuesday around 8 p.m.

MPD says its leadership asked them to peacefully disperse when officers observed violations of the law.

After waiting approximately 20 minutes, the crowd was again asked to leave.  Some of those present left the area but others refused to leave. MPD began to make arrests.  Some of the crowd became disorderly and resisted and were also arrested.

Community Activist Tracy Dent says while some residents have expressed gratitude that the police responded, he was critical that it might be too much.

"The area has been cleared and MPD continues to patrol the area," said Sgt. Timothy Gauerke.  "Approximately 10 people were arrested for disorderly conduct and resisting an officer."

Just one day earlier CBS 58 News spoke with Police Chief Ed Flynn about how the department is keeping the peace in the wake of the disturbances and fires that happened in the area just a couple of weeks earlier.

"Sherman Park's been restored to its residents," Chief Flynn told CBS 58's Michele McCormack. "Right now we're continuing to work through peace makers and community workers to make sure the scene of the incident is restored to the residents as well. They don't want to have continuous vigils as they go to their front yards and try to get to work and get a good night's sleep. So, that work is continuing."

The Milwaukee County Sheriff's Office sent out a release saying it was now on high alert given what happened.

"Tonight, at about 8:00 p.m., multiple MPD squads responded to a group of subjects who were disturbing the neighborhood one block north of Sherman Park at 44th and Auer.

MPD advised MCSO deputies that the law-abiding citizens living in the area were complaining about a group of rowdy people doing drugs and disturbing their neighborhood at the intersection of 44th and Auer, and that the crowd could move towards Sherman Park,

The perimeter of Sherman Park was secured by TEU deputies.  The park has been closing four hours early, at 6:00 p.m., since the rioting several weeks ago, preventing any gathering of those seeking to ruin the quality of life in the Sherman Park neighborhood and protecting the Boys and Girls Club property.

The crowd was contained by MPD one block north of Sherman Park and it was reported that MPD made several arrests."