NOW: Police looking for suspect in armed robbery to grocery store on Milwaukee’s south side

MILWAUKEE (CBS 58) -- A south side grocery store is robbed at gunpoint and now Milwaukee Police are trying to find the person responsible.

Police say La Franja Grocery in the 2300 block of S. 9th Place was robbed around 11:00 a.m. on December 10. According to investigators, a man came into the store asking to use the bathroom before pointing a gun at an employee an demanding money and cigarettes. The suspect then fled the scene in his car.

Police have released surveillance photos of the suspect. He was last seen driving a black, 4-door Honda Civic with missing hubcaps and black steel rims. 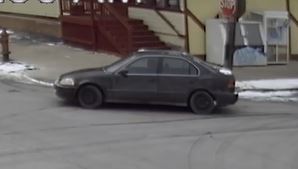