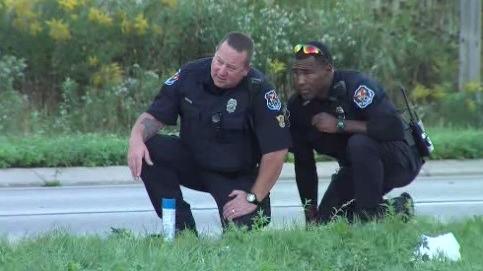 Two men are recovering in the hospital Tuesday morning after being struck by an suspected hit and run driver in Mount Pleasant.

It happened about 4:45 a.m. as dispatchers got the call that people were injured in the roadway.

"One of the subjects has facial injuries the other has an injure to the leg," Mount Pleasant Police Sgt. Matthew Soens said. "From talking to witnesses it sounds like these individuals were in the street when they were hit by the car who did not stay at the scene."

Soens said there is evidence of a skid mark and shattered glass.

Officers shut down the southbound lane of traffic for hours as investigators canvassed the shoulder to look for evidence.

"Someone called and said they saw an individual after the incident happen walk over there and walk back in the road where the other people were.  So we're looking to see if they threw something or if there is some type of evidentiary value," Soens said.

Police say the victim's intoxication hindered their efforts to gain a description of the car.

"The victims will be interviewed again once they are not under the influence of whatever they're under and try to get more information from them and go from there," Soens said.

The unknown car reportedly left the scene south on Highway 32. If you have any information that can help please call police.