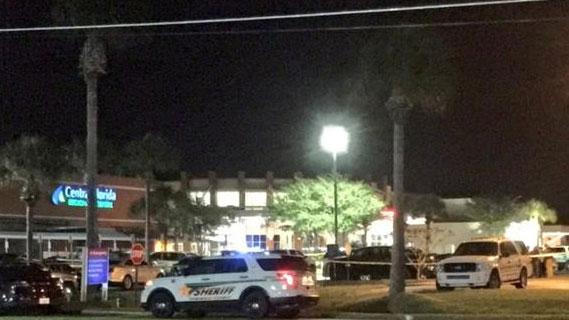 SANFORD, Fla. (CBS NEWS) --A man hid in the trunk of his estranged wife's car at a Florida Chili's restaurant Sunday, before stabbing and running her over, and then killing their two children and himself,reports CBS affiliate WKMG.

Henry Brown then drove to an apartment complex, where he changed vehicles and picked up the couple's children, a 4-year-old boy and a 1-year-old girl, from a babysitter.

Around 12:25 a.m., Henry Brown drove a pickup truck to Central Florida Regional Hospital in an attempt to find his estranged wife, according to authorities. Seminole County deputies and Sanford police officers confronted Henry Brown, who fired at the officers as he ran out of the hospital. Deputies returned fire, but no one was hit or injured during the exchange, officials said.

Minutes later deputies used spike strips to slow Henry Brown's vehicle, and when it came to a stop, authorities found Brown and his two children dead inside, officials said.

Investigators believe Brown killed his children at some point after picking them up, and then committed suicide in his vehicle as law enforcement prepared to apprehend him.

Chericia Brown was taken to Central Florida Regional Hospital , where she died, officials said. One of the two people who were hit by Henry Brown's vehicle remains hospitalized.

Deputies said the killings may have stemmed from a months-long domestic dispute between Henry and Chericia Brown.