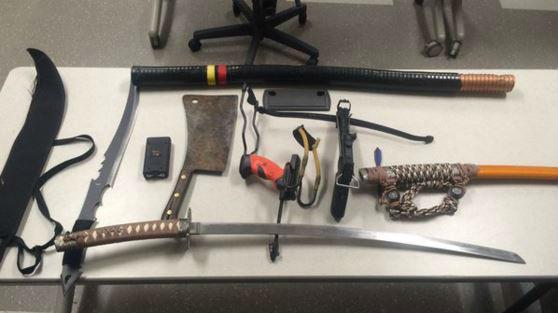 Foxborough Police posted a photo of several weapons that were taken from the employee parking lot.

Among the weapons was a meat cleaver and a sword. There was also an electric stun gun.

Officers working the Winter Classic between the Boston Bruins and Montreal Canadiens were called to investigate a suspicious man in the off-site employee parking lot around 11:00 AM on New Year's Day.

Bromson is charged with trespassing, disorderly conduct, possession of an electric stun gun and three counts of assault with a dangerous weapon.

Foxborough Police said the assault charges were due to Bromson's "actions and words with an object that caused three witnesses to be in fear for their safety."

He is scheduled to be arraigned in Wrentham District Court on Monday.

"This is an isolated incident and at no time was there a threat to Gillette Stadium," police said. "Bromson was taken into custody without incident and there were no injuries to any of the involved parties."

A New England Patriots spokesman said Bromson is not an employee of the team or Gillette Stadium, the Patriots' home field, and it did not appear that he was there to attend the Winter Classic.

Police encountered Bromson on New Year's Eve around 4:30 p.m. at a hotel. Hotel management asked him to leave and police helped him to another hotel in the area.

Bromson, who police say was drunk during the New Year's Day incident, is believed to be living out of his car.