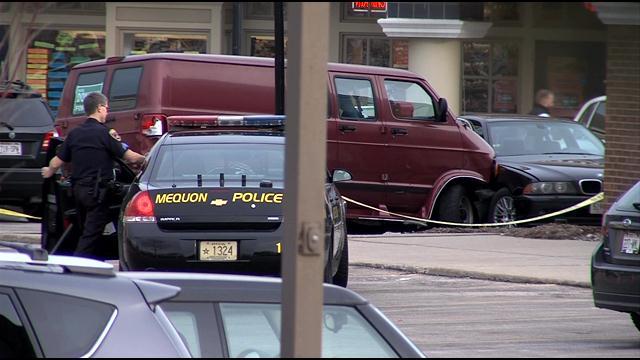 Police tape and mangled wreckage in front of the Mequon Sendik's on Port Washington Road covered a deadly scene Lori Gerischer can't get out of her head.

Monday around 3:40 p.m., Gerischer was working about 200 feet away when a red van smashed in reverse into five parked cars, then drove forward and hit an 85- year-old woman before crashing into another car. That woman, Lorraine Winter of Milwaukee, died at the scene. Her husband, 87-year-old Henry Winter, was the driver.

\"He was just sitting there with his arms crossed and looking, like, white as a ghost,\" Gerischer said a fellow witness told her.

Tuesday morning, things were back to normal in the parking lot where the crash happened. But many drivers, including 91-year-old Virginia Awe were still rattled.

\"It made me think twice about my driving,\" Awe said as she loaded groceries into her car.

Awe feels lucky to still be behind the wheel, but thinks the state should test elderly drivers more often than the current eight-year required test.

\"Perhaps 70 or 75, perhaps every five years would not be too much to ask,\" Awe said before driving off in her car.

\"There's a lot of incompetent drivers of all kinds of ages,\" shopper Michael Day said. \"You certainly can't blame any particular group of people. It's just an individual thing.\"

An individual family shaken by a sudden death.

Henry Winter remains in the hospital as of Tuesday night. Mequon police say they do not plan to charge Winter at this time.