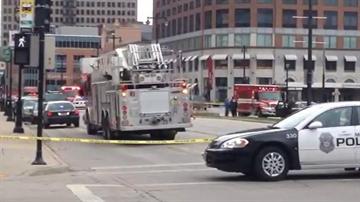 MILWAUKEE -- Milwaukee police have identified the man shot and killed by an officer on April 30, 2014, as 31-year-old Dontre Hamilton. Milwaukee Police Chief Ed Flynn says this officer-involved shooting is the result of the lack of resources offered to the mentally ill.

Chief Flynn believes this a symptom of Milwaukee's mental health problem. Flynn says Hamilton has been diagnosed with schizophrenia in the past. Police report Hamilton has a criminal record that includes armed robbery and disorderly conduct. The Milwaukee Police Department encountered Hamilton in 2013 when he tried to commit suicide.

During a news conference, Chief Flynn told reporters most people killed by MPD officers have mental health issues. He said not enough is being done for the mentally ill, and that his department is not the solution to Milwaukee's mental health problem.

Chief Flynn mentioned an e-mail from Governor Scott Walker on mental health awareness month. The chief says none of Walker's investments mentioned in that press release goes to the heart of Milwaukee mental health problem.

The chief is calling for a state investigation to identify the holes in the mental health system.