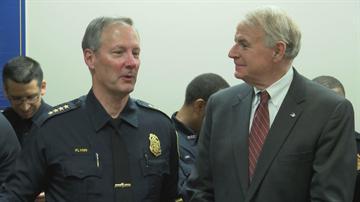 MILWAUKEE -- Police Chief Ed Flynn has tried before to make illegally carrying a weapon a harsher crime without much success, but he refuses to see people in Milwaukee \"held hostage to violence\" any longer.

\"If you're in the criminal lifestyle right now, you're more afraid to get caught without the gun than to get caught with it,\" Flynn said.  \"I'm cautiously optimistic that perhaps we can get to where we need to  be.\"

His target is toughening gun laws.  Right now, carrying a concealed weapon without a permit is a  Class A misdemeanor -- a maximum of nine months in jail and up  to $10,000 in fines.  Flynn wants that changed to a felony.

\"What we're doing has nothing to do with law abiding, gun  owners' rights,\" Flynn said.  \"It has everything to do with the easy access of firearms for career criminals.\"

Milwaukee-area lawmakers like State Senator Alberta Darling  have worked with Flynn in the past few years, but so far their idea hasn't gotten anywhere in Madison.

\"I don't think it's in anyway direct opposition,\" Governor Scott Walker said.  \"I think it's just a matter of higher priority in one place versus another.\"

Governor Walker says he'd support strengthening the law, but knows it's been a challenge convincing law enforcement in places where there's less crime.

\"For chiefs, [district attorneys], sheriffs in other parts of the state that, if it's not a problem today, could certainly be a problem in the future,\" Walker said.

\"That's not a common Wisconsin problem, but it is a problem for the Wisconsinites that live here,\" Flynn said.

Walker said passing this kind of legislation could be a possibility, but it will take some lobbying by supporters as well as time -- perhaps sometime next spring.