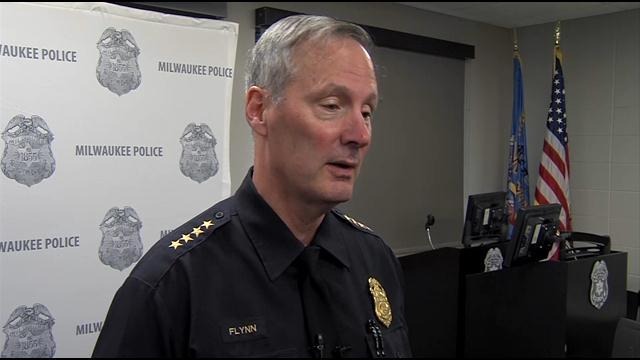 Police Chief Ed Flynn called a no confidence vote against him nothing more than politics by the Milwaukee Police Association leadership.

\"I see another political move on the chess board,\" Chief Flynn told CBS 58 News Friday. \"I'm bifurcating what I think about union leadership, which is not much, and our officers which is quite a lot.\"

The last time the city saw a no confidence vote was in 1991 with Chief Phillip Arreola who wound up leaving before the end of his full term.

Flynn says he was told only 1/3 of the union members voted.

Milwaukee Police Association President Mike Crivello wouldn't give a specific number but said a majority of 1,600 members cast ballots with 99% voting no confidence.

\"If the chief needs any help getting to the airport,\" Crivello said during a press conference, \"I'd be more than happy to pick him up.\"

The non-binding vote comes after the controversial firing of Officer Christopher Manney in connection with the fatal shooting of Dontre Hamilton in Red Arrow Park.

Chief Flynn said Manney violated police procedure when he patted down Hamilton who was known to be emotionally disturbed.

Mayor Tom Barrett reiterated his confidence in Chief Flynn issuing a statement that said in part:

\"At a time when the citizens of Milwaukee are dealing with the aftermath of the Red Arrow Park shooting, the MPA leadership is trying to stoke a political fire.\"