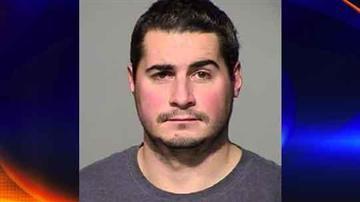 Milwaukee County Sheriff's say they arrested 34-year-old, drunk driver, Jason A. Krzyzanowski after he crashed into a median wall and fled the scene.

The incident happened Friday around 8:50pm after a witness reported seeing Krzyzanowski's black Cadillac on I-94 west of S. 84th Street  crash into the median wall.

Police say the witness followed the suspect's vehicle as it drove away from the scene until a deputy arrived.

Upon seeing the deputy, the driver fled on foot through yards in the neighborhood near the 400-block of S. 87th Street.

Several sheriff’s deputies squads responded to assist in the search, along with Wauwatosa officers and a West Allis police officer with his K-9 partner.

The K-9 tracked the subject to where he was hiding in the shrubbery in front of a residential home in the 8700 block of W. Adler Street.  A deputy sustained minor injuries to his leg while apprehending the subject.

Krzyzanowski is from Milwaukee and this is his 2nd- DUI and Resisting/Obstructing arrest.  He was also convicted in May 2004 for his first drunken driving offense.

If convicted of the current charges, he faces up to 15 months in jail.