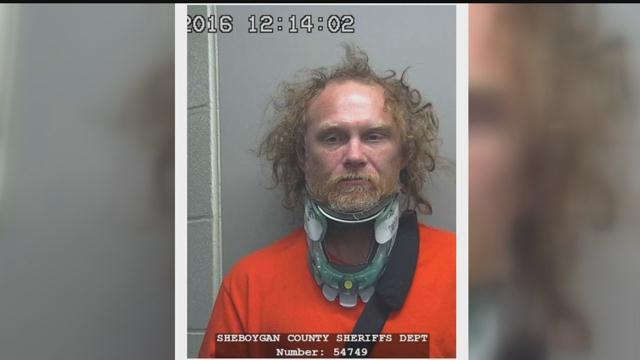 A Plymouth man found trapped beneath a truck earlier this month at a car dealership has now been charged with multiple felonies.

Sheboygan County authorities say the 45-year-old Robert Thalheim was trying to steal the tires off a 2016 GMC Sierra Denali when it fell onto his body in the late hours of June 10.

According to the criminal complaint, the truck crunched Thalheim on the grounds of Meyer Motors for around seven hours.

It was a customer who discovered him the next morning, according to the criminal complaint.

Thalheim wears a neck brace in his mugshot - a sign of his injuries that authorities say include a fractured skull. According to a criminal complaint, just before midnight on June 10 approached the vehicle parked on a side lot of the dealership.

Management Meyer Motors said it appeared that Thalheim was using sub-standard equipment to jack the truck but was able to take all the wheels off of it.

Employees believe Thalheim was retrieving a fallen lug nut when some 5,000 pounds of the vehicle pinned him to the ground on the front passenger side.

The divets are still visible in the pavement where part of the truck touched the ground.

When authorities arrived around 6:45 a.m. the next morning Thalheim was conscious. According to the criminal complaint - before being life-flighted away - Thalheim told officers he was "doing something bad" when the truck fell on him.

He's now charged with felony criminal damage to property and removal of a major car part.

Thalheim faces up to three years in prison for those charges.

The vehicle that crushed him is still up for sale - sticker price $67,825.