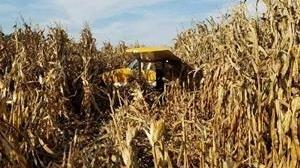 A plane crash occurred in Kenosha County around 3:09 PM on Tuesday.

According to Kenosha County Sheriff’s Office, deputies along with the Randall Fire Department responded to the corn field northwest of the intersection of Hwy KD and Hwy C in the Town of Randall for a plane crash.

Deputies located the plane and its pilot in the corn at that location.

According to preliminary reports the plane had been enroute to Chicago Executive Airport from and airport in Burlington when it developed engine problems.  The pilot attempted to land at the Westosha Airport but was unable. The plane came to a landing in the corn field.

The plane is a Cessna 172 manufactured in 1969 per the 72 year old pilot, a male from Grayslake Illinois. The pilot was not injured.  The plane suffered moderate damage.   There were no injuries to persons on the ground and no buildings were damaged.  There was some damage to the corn crop in the field.

At this time Deputies and rescue personnel are on scene and the Federal Aviation Administration will be contacted.