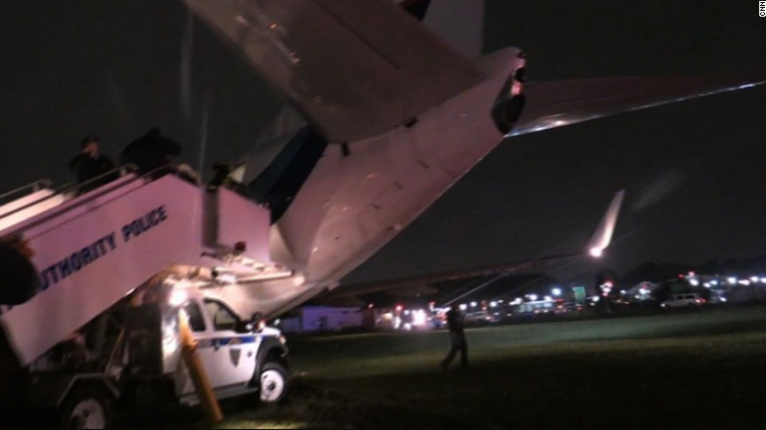 Rescue crews were responding to the scene. The incident took place during a rainy night in the city.

The press pool in the back of the aircraft could feel the plane fishtailing as it touched down and sliding off the runway before coming to a very sharp halt in the grass off the side of the runway.

"We could feel the plane moving, and it was just not a natural landing that you experience," CNN's Elizabeth Landers, who was on the plane, told CNN's Erin Burnett on "OutFront."

Stephanie Grisham, a spokeswoman for Donald Trump's campaign, said the businessman called Pence shortly after the incident, adding that Trump "is very glad everyone onboard the plane is safe."

There was some noticeable damage to the runway, although a campaign spokesperson told reporters there was no structural damage to the plane.

Landers said the Indiana governor's trip to New York had initially been delayed due to inclement weather. His plane was kept in a ground hold at the airport in Fort Dodge, Iowa, earlier in the day.

Mary Schiavo, a former inspector general for the Department of Transportation, explained to CNN's Anderson Cooper that the weather likely prevented the plane from getting "good traction."

"When there's a layer of water on it, it is very much like hydroplaning in your car," she said, adding, "LaGuardia has had this very thing happen before."

Les Abend, a CNN aviation analyst, also suggested on CNN's "Anderson Cooper 360" that low temperatures in New York could have made the runway near freezing, complicating the landing.

Once the plane had come to a halt, Pence went to the back of the plane to speak with the press. As everyone on board deplaned, Pence could be seen speaking with emergency responders. A spokesman for Pence said a fundraiser he had been scheduled to attend in the city was canceled.

A spokesperson for the Federal Aviation Administration told CNN it will be investigating the incident.

CNN's Noah Gray and Rene Marsh contributed to this report.