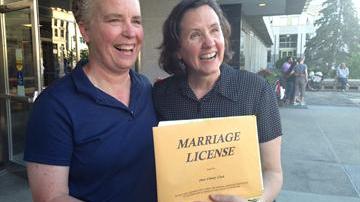 MADISON -- Wisconsin now becomes the 20th state in the country to see a same-sex marriage ban go down. In Madison, the people who played a big part in making that happen started celebrating.

\"it feels like a party, and that's what it should feel like.\" said Pam Kleiss, one of the plaintiffs in the case against the state.

“We just don't think that the majority should vote on the civil rights of the minority. So i think the courts are actually the appropriate place for this fight to happen.\" said Kristen Hansen from the ACLU Wisconsin.

Eight couples were on the winning side of this fight.

\"The eight couples were not the only people who worked for this. Anyone who ever came out over the last 30 years made this happen.\" said Salud Garcia, another plaintiff in the case.

Garcia and Kleiss are among the group of couples who won the suit, and Friday night they got a marriage license from Dane County.

\"It's exciting. It's a long time coming and all of us own a piece of this. All of us.\" said Garcia.

While they plan on getting married at a church later on, many other couples didn't want to wait.

Many couples say they rushed to get marriages done here tonight because they are worried there could be another temporary roadblock put in place because of an appeal by Wisconsin’s Attorney General J.B. Van Hollen.