MILWAUKEE (CBS 58) – A well-known restaurant on Milwaukee’s east side is facing criticism after its employees went on strike Friday, Sept. 24 and were subsequently informed of their “voluntary resignation.”

Those who planned on dining in at Pizza Man over the weekend were met with this sign on the door: “Thank you for visiting. Pizza Man will only be offering take out service for this evening. Thank you for your understanding.” 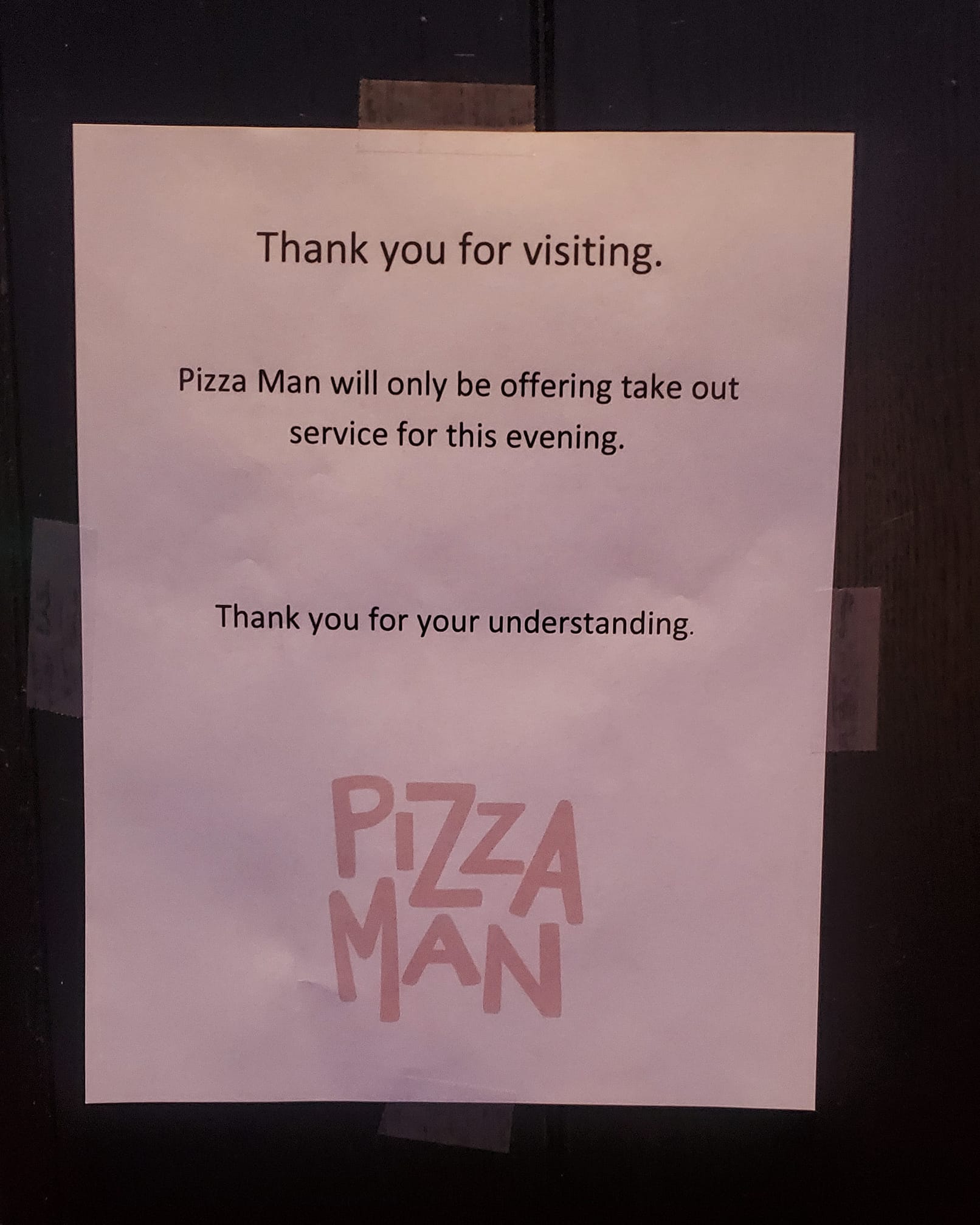 What the sign didn't mention was the reason for a weekend of carryout only. The employees scheduled to work Friday night staged a strike in support of Henry’s on Belleview.

Henry’s is a small neighborhood pub and grill located in the same building as Pizza Man. It’s been a fixture in the Murray Hill neighborhood since 1982, moving from its original location to its current location on Downer and Belleview in 1998. In 2013, Pizza Man officially moved into the building, occupying the space next door to, and directly above, Henry's.

The operators of Pizza Man, F Street Hospitality Group, decided to build the restaurant’s kitchen on the second floor, in a space just above Henry's that had previously been occupied by apartment units.

Since the buildout, Pizza Man's pipes have leaked water down into Henry's dining room and kitchen numerous times, causing flooding and at times enormous cleanup efforts. The small business has in the past been forced to shut down for days at a time to recover.

"They think it's over there, it could be over there, but the water finds a hole and comes down," said Henry's owner Nader Pakroo.

He showed CBS 58 video on his phone of the first shower he experienced in his dining room in 2014, after Pizza Man installed a new kitchen above him. Water poured through the ceiling, filling garbage cans below.

"These issues with our neighbor doesn't help at all, in fact it hurts us more and more," said Pakroo.

One of the worst episodes took place in May of 2018, when Henry’s was forced to close for a week due to water damage. Heaters, dehumidifiers and fans were kept running non-stop for five days in an effort to dry the interior.

Pakroo says it happened last week, back in June, and again and again over the years.

"It's the same problem, this was supposed to be fixed back in June," said Pakroo, showing more videos recorded on his phone.

He's now talking to the city. "We've just had it, it's just not fair," said Pakroo.

The last time a plumber came out he rendered a temporary fix, noting that the problem will persist until the situation is addressed in full. And as predicted, about a month later, water began dripping into the kitchen once more, prompting yet another shutdown.

Those in the community have taken notice – both customers of Henry’s, and as of late, even Pizza Man’s own employees.

This past Thursday, Sept. 23, water began raining down in the middle of Henry’s dining room.

Pizza Man was immediately notified, their staff was sent home and they shut down for the rest of the night. Friday afternoon, Pizza Man called their employees to return to work – the same employees who had been sent home the night before due to the leak. They refused.

"We decided we were not going to show up to work in support of Henry's, because every time we ran our kitchen, we were leaking onto Henry's," said former Pizza Man server Samantha Schoenwalder.

She said 12 employees refused to work and were fired, Pizza Man calling it a "voluntary resignation." The employees were later offered their jobs back. Six returned and gave their two weeks' notice in order to pay bills. But Schoenwalder is still without a job.

"With every decision that we made, I'm still 100% behind it. I have no regret, no anxiety," said Schoenwalder.

Many have spoken out questioning why the restaurant group's initial response was to let their employees go rather than fixing the plumbing. Others question why the restaurant didn’t address these repairs during the shutdown in 2020.

But even more in the community applauded the outspoken Pizza Man employees via social media, offering them free drinks at Henry’s, job resources and commending their efforts to affect change.

Plumbing trucks were parked outside the building until about 3:15 p.m.

Pakroo hopes the problem will finally be solved.

He said Pizza Man showed him the repairs they're making and they appeared comprehensive.

"Henry's has been here for a long, long time. It used to be on Downer and now here. We just try to survive in this business."