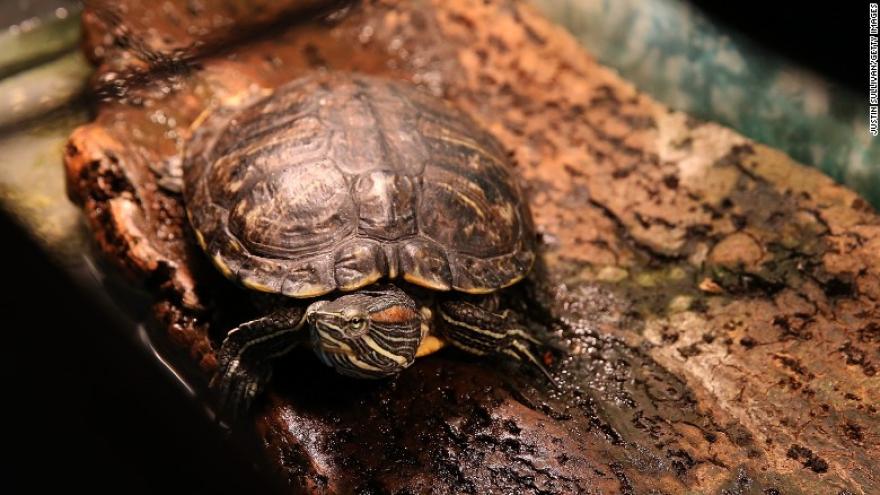 (CNN) First, the Centers for Disease Control and Prevention warned us not to kiss our chickens. Now, the agency is telling us not to pet or give turtles as gifts.

Pet turtles are at the heart of a multistate outbreak of salmonella, the CDC said Tuesday. There have been 37 cases in 13 states since March, and the outbreak has sent at least 16 people to the hospital, though there have been no deaths. Twelve of the cases were in children 5 or younger.

Salmonella infection symptoms include diarrhea, fever, and abdominal cramps. The good news is that most people feel better after five to seven days of being sick. However, those with weakened immune systems, children under 5 or adults over 65 are particularly vulnerable to severe infection.

Reptiles are responsible for more than 70,000 cases of salmonellosis each year, the CDC estimates.
In nearly half of the cases reported by the CDC, the patients have said that they had some kind of contact with a turtle, by interacting either with them or with the turtle's environment, such as the water in a habitat.

Turtles often carry salmonella bacteria on their skin or shells, but the bacteria do not make them ill. The pets have made a number of people sick over the years and have been at the heart of several outbreaks. The CDC and the Food and Drug Administration recommend against buying them as pets or giving them as gifts. The FDA banned the distribution and sale of turtles with shells smaller than 4 inches in 1975.

Nine patients in the current outbreak were interviewed about their turtles; six said they bought them from a street vendor or at a flea market or got a turtle as a gift.

The CDC will continue to investigate the outbreak, which it expects to grow.

If you have a pet turtle, the CDC recommends against giving it free range in the house. Take particular care not to keep turtles near any kind of food preparation area. Don't clean aquariums or turtle supplies in your kitchen sink, and disinfect the tub used to clean the turtle habitat.
If you handle a turtle, be sure to wash your hands thoroughly immediately afterward.