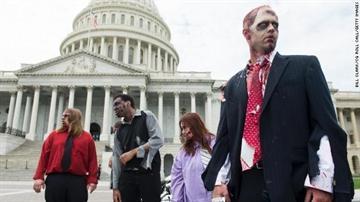 Washington (CNN) -- Never fear the night of the living dead -- the Pentagon has got you covered.

From responses to natural disasters to a catastrophic attack on the homeland, the U.S. military has a plan of action ready to go if either incident occurs.

It has also devised an elaborate plan should a zombie apocalypse befall the country, according to a Defense Department document obtained by CNN.

In an unclassified document titled \"CONOP 8888,\" officials from U.S. Strategic Command used the specter of a planet-wide attack by the walking dead as a training template for how to plan for real-life, large-scale operations, emergencies and catastrophes.

And the Pentagon says there's a reasonable explanation.

Nevertheless, the preparation and thoroughness exhibited by the Pentagon for how to prepare for a scenario in which Americans are about to be overrun by flesh-eating invaders is quite impressive.

A wide variety of different zombies, each brandishing their own lethal threats, are possible to confront and should be planned for, according to the document.

Zombie life forms \"created via some form of occult experimentation in what might otherwise be referred to as 'evil magic,' to vegetarian zombies that pose no threat to humans due to their exclusive consumption of vegetation, to zombie life forms created after an organism is infected with a high dose of radiation are among the invaders the document outlines.\"

Every phase of the operation from conducting general zombie awareness training, and recalling all military personnel to their duty stations, to deploying reconnaissance teams to ascertain the general safety of the environment to restoring civil authority after the zombie threat has been neutralized are discussed.

And the rules of engagement with the zombies are clearly spelled out within the document.

\"The only assumed way to effectively cause causalities to the zombie ranks by tactical force is the concentration of all firepower to the head, specifically the brain,\" the plan reads. \"The only way to ensure a zombie is 'dead' is to burn the zombie corpse.\"

There are even contingency plans for how to deal with hospitals and other medical facilities infiltrated by zombies, and the possible deployment of remote controlled robots to man critical infrastructure points such as power stations if the zombie threat becomes too much.

A chain of command from the President on down along with the roles to be played by the State Department and the intelligence community for dealing with the zombie apocalypse are clearly spelled out in the document.

The training document was first reported by Foreign Policy magazine.

This is also not the first time zombies have been used as the antagonist in U.S. government training operations. Both the Centers for Disease Control and the Department of Homeland Security have used the creatures as a vehicle for training their personnel in the past.

Defense officials stress the report in no way signals an invasion of zombies is on the horizon. The only real purpose of the document was to practice how to execute a plan for handling something as large and serious a situation like flesh-eating beings trying to overrun the United States.

Officials familiar with the planning of it say zombies were chosen precisely because of the outlandish nature of the attack premise.

\"Training examples for plans must accommodate the political fallout that occurs if the general public mistakenly believes that a fictional training scenario is actually a real plan,\" the document says. \"Rather than risk such an outcome by teaching our augmentees using the fictional 'Tunisia' or 'Nigeria' scenarios used at (Joint Combined Warfighting School), we elected to use a completely impossible scenario that could never be mistaken as a real plan.\"

So, practice for the when, where and how to plan for a more likely disaster scenario? Yes. But zombies of all stripes would be well advised to take note of this directive to Strategic Command personnel buried within the document.