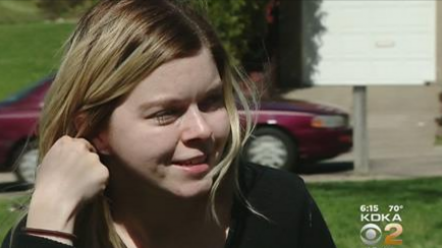 BRIDGEVILLE (KDKA) — Juliet Oleynik took her kids to Flight Trampoline Park in Bridgeville on Tuesday, a day she says she will have a hard time forgetting.

“I was trying to fight back tears and was shaking a little because I didn’t even know what to say,” Juliet Oleynick said.

“The one just said ‘hey, next time you’re gonna do that you need to go up to the party room’,” Oleynick said.  “I was like, ‘oh just so you know, it’s actually illegal for you to ask me that.’ And he was pretty taken aback. He’s young, he has no idea.”

The employee told Oleynick his manager told them to ask nursing mothers to wear covers.  That’s when things got even more uncomfortable for her.

“The employee that was next to him just got irritated and shouted kids can’t be seeing your (expletive) hanging out everywhere,” Oleynick said.

Under Pennsylvania’s Freedom to Breastfeed Act, a mother is permitted to breastfeed her child in any location, public or private whether the mother is covered or not.

The law also states that breastfeeding should not be considered a crime of indecent exposure.

“I think most moms aren’t out there to try to show their bodies. We’re just trying to feed our babies,” Oleynick said.

Sara Sites is the La Leche League Leader in Peters Township, a group that offers support to breastfeeding mothers.  She has two kids herself.

“I think it’s an awesome learning opportunity not only for Flight Trampoline Park but for everyone in general,” Sites said.

“An incident occurred at our Bridgeville location that was not keeping with our corporate values and for that we sincerely apologize. This apology extends not only to the breastfeeding mom that was involved but to her friends, family and all moms.”

The employee that made the smart remark to Oleynick was later fired.

Amy Wadas:  “Do you think you’ll be going back there?”

Oleynick:  “I don’t know if I can answer that right now. Maybe in time.”