Paul Revere, '60s rocker and leader of the Raiders, dies at 76 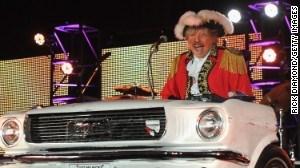 Paul Revere, leader of the 1960s rock band Paul Revere and the Raiders, died Saturday at his home in Idaho, the band's website reported. He was 76. Revere, whose birth name was Paul Revere Dick (according to a biography on the Internet Movie Database), was front man for the band that often performed in three-cornered hats and other clothing harking back to the American Revolution.

Revere was born in Nebraska and played in bands in Idaho and Oregon, according to a tribute on the band website written by Roger Hart, who managed the group in the early days. Hart said he took the band to Hollywood and signed them to a deal with CBS/Columbia Records.

The band recorded a string of hits in the 1960s and early 1970s, including \"Kicks,\" \"Hungry\" and \"Indian Reservation.\" Revere, the band's organist, had a hyperactive effervescent stage personality and came to be known as the \"Madman of Rock 'n' Roll.\"

Paul Revere, on keyboards, performs with Paul Revere & the Raiders in the 1960's.

In a tribute on the band's website, a fan remembered seeing the band for the first time.

\"My dad took me to a Paul Revere and the Raiders concert in Buffalo NY in April of 1967,\" she wrote. \"I think other than the male acts he was the ONLY man there. He said he was deaf for a week afterward, but he admitted he'd enjoyed the show and the Raiders. The Raiders were always fun and in good taste, parents didn't have to worry.\"

The band's fame grew as the Raiders appeared on \"Dick Clark's American Bandstand,\" \"Where the Action Is,\" the \"Ed Sullivan Show,\" the \"Tonight Show with Johnny Carson\" and even the \"Batman\" television show, Hart wrote.

Revere recognized his debt to Clark. In a CNN.com story, Revere wrote about seeing his mentor six weeks before Clark's death in 2012.

The band became a fixture on the oldies circuit in later years and had a tour scheduled to start in November.

Revere's cause of death was not disclosed, but Hart said Revere died \"peacefully.\"