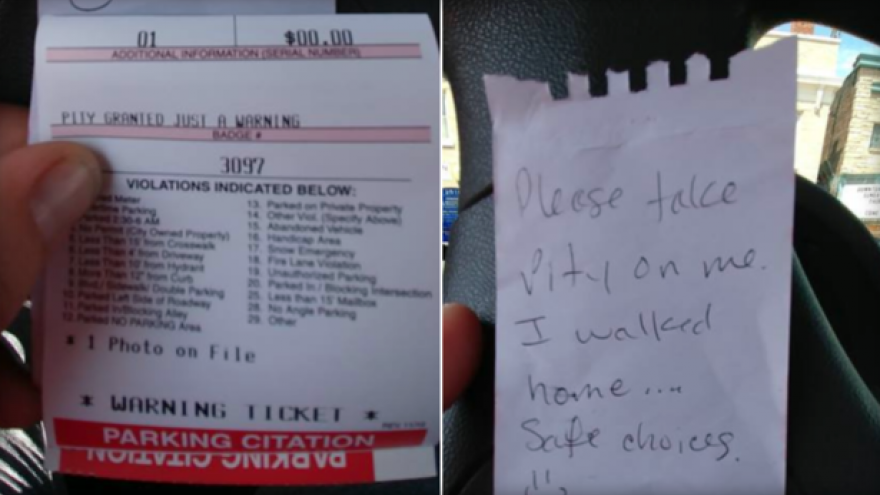 A parking control officer was about to write a ticket for an expired meter while making the rounds in downtown Wausau, Wisconsin, Thursday morning when he spotted a handwritten note tucked underneath the car's windshield wiper.

The driver, who has not been identified, ended his plea with a smiley face.

Hellrood was surprised. It's not every day a driver purposely leaves their car in a spot that could lead to a ticket. But he appreciated the driver's honesty — as well as the decision not to drive after what he assumes was a night of drinking.

So, he decided to give the driver a warning instead of a $5 ticket.

"Pity Granted, Just A Warning," the Wausau Police Department posted on Facebook Monday. "Parking Control Officer Jim Hellrood can appreciate people making safe choices, and a good sense of humor. That's why he recently issued a warning to a vehicle left in a metered lot overnight."

Lt. Cord Buckner, of the Wausau Police Department, told CBS News he's never heard of anything like this happening before in the area, but he's happy with the driver's decision not to get behind the wheel.

"[This driver] realized it may not have been a safe choice and risked a citation rather than risk their own safety," Buckner said. "We certainly applaud that decision to not drive."

"Ultimately, parking enforcement officers generally take that attitude of trying to educate rather than being punitive," Buckner said. "They aren't just doing it haphazardly."

Buckner says the department has been pleased by the response and praise from residents after the note was posted on Facebook — but he also hopes to send another message so others don't make a similar mistake.

"We're pleased people follow what we do and take an interest and understand the decision," Buckner said. "But if you are planning on drinking avoid driving all together."