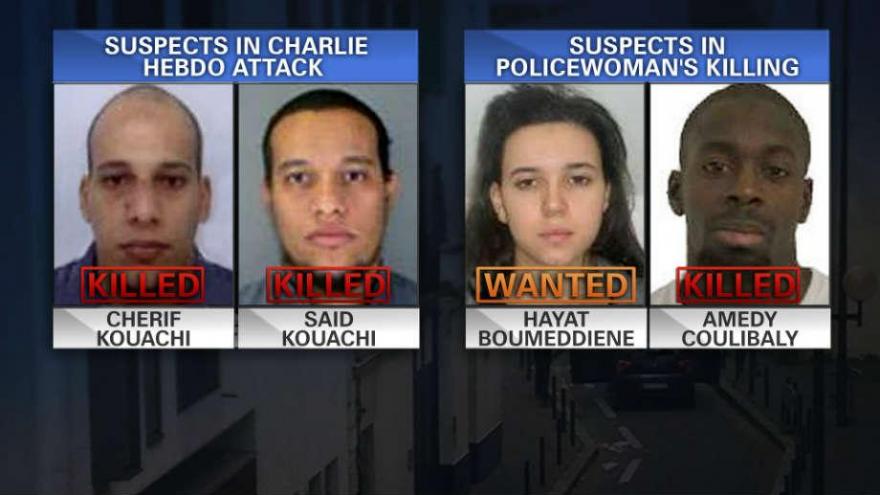 (CNN) -- France was on its highest alert level Monday as people went back to work and children returned to schools following the Islamist terror attacks that killed 17 people.

At least 10,000 soldiers and 8,000 police officers will be deployed across the country, French media reported.

"We must remain vigilant because the threat is still very much present," Prime Minister Manuel Valls told CNN affiliate BFMTV.

Three men blamed for the terrorist attacks are dead.

One of the men -- Amedy Coulibaly, who authorities say carried out the attack at a kosher market -- has been in a U.S. terrorist database "for a while," a senior U.S. law enforcement official told CNN on Monday. The database is officially called the Terrorist Identities Datamart Environment, known as TIDE.

A woman alleged to be Coulibaly's accomplice was apparently not in the country last week, according to news reports from Turkey.

The Anadolu news agency reports that Hayat Boumeddiene arrived in Turkey from Madrid on January 2 -- five days before the first attack in Paris. The news agency said she stayed at an Istanbul hotel and then traveled to Syria on Thursday. The last place authorities spotted Boumeddiene was somewhere near Turkey's border with Syria.

Perhaps the clues that could lead to her whereabouts lie in an apartment outside Paris.

Valls told CNN that authorities are looking into whether Boumeddiene helped prepare the attacks before leaving France.

Coulibaly may also be linked to a fourth attack. Ballistics suggest a connection between the market killings and the shooting of a jogger last week, Paris prosecutor Francois Molins said. But investigators have not confirmed who shot the jogger, who is reported to be in the hospital with life-threatening injuries.

The wife of Cherif Kouachi has condemned her husband's actions.

"She condemns every violent act," her attorney, Christian Saint-Palais, said in a statement. "She was astonished when she learned her husband was involved in the Charlie Hebdo attack."

The statement -- which did not include the wife's name -- expressed her sympathies for the families of the victims.

Some 3.7 million people marched in anti-terrorism rallies Sunday across France, including 1.5 million in Paris.

About 40 world leaders joined in the march in the French capital.

Police said no incidents had been reported despite the record number of people involved in the Paris rally.

Still, French law enforcement officers have been told to erase their social media presence and carry weapons at all times because terror sleeper cells have been activated in the country, a police source said.

Investigators are looking into whether the attackers last week were part of a larger cell and, if so, when it may strike again, Valls told CNN's Christiane Amanpour.

'France without Jews of France is not France,' PM says

About 4,700 officers will be tasked with securing 717 Jewish schools, Valls said.

Four of the victims were killed Friday at the kosher market, the latest in a string of anti-Semitic attacks that have led many Jewish families to leave the country.

A Muslim employee is credited with helping hide some hostages in a walk-in freezer, which he turned off. A photo from the freezer shows a baby was among the hostages.

"The situation can only get worse. It does not look like the problem is going away," high school student Gary Uzan, 17, told CNN on Monday. "I will go to Israel. It is better for us. It is safer."

Valls said in an interview on BFMTV, "France without Jews of France is not France."

Israeli Prime Minister Benjamin Netanyahu met Monday with former French President Nicolas Sarkozy and visited the kosher market. The attack there took place the day after a police officer was killed, and two days after the massacre at Charlie Hebdo.

The president of the World Jewish Congress met with French President Francois Hollande on Monday at the Elysee Palace. Ronald Lauder praised France's response to the attacks and called Sunday's marches a "strong signal," the group said in a statement.

"Lauder also told Hollande that the WJC is considering re-opening a representative office in Paris given French Jewry's importance, which the French president welcomed," the group said.

Lauder traveled in from Cairo, where he had met with Egyptian President Abdel Fattah al-Sisi.

In the video, Coulibaly identifies himself as "Abou Bassir AbdAllah al-Irfiqi" and a "soldier of the Caliphate," while warning the West, "You attack the Caliph, you attack ISIS, we attack you. You can't attack and not get back anything in return. " It's unclear when all the video was shot.

According to a source, Coulibaly made several phone calls about targeting police officers in France.

Meanwhile, the United States believes Charlie Hebdo assailant Said Kouachi may have met the late American terrorist cleric Anwar al-Awlaki at some point in Yemen and received orders from al Qaeda in the Arabian Peninsula to carry out an attack, a U.S. official told CNN.

But U.S. Attorney General Eric Holder told CNN there was no "credible information" on who sponsored the violence.

U.S. on alert after ISIS message

The threats go well beyond France.

The New York City Police Department and other U.S. law enforcement agencies responded to a threat from ISIS after someone released again a September message that tells followers to "rise up and kill intelligence officers, police officers, soldiers, and civilians" -- specifically naming the United States, France, Australia and Canada as targets.

According to a New York police memo obtained by CNN, department employees were told to "remain alert and consider tactics at all times while on patrol," especially in light of the attacks in France last week. The FBI and Department of Homeland Security issued a similar bulletin to law enforcement across the United States.

Meanwhile, a firebomb was hurled at a German newspaper that reprinted the Charlie Hebdo cartoons. No one was in the Hamburger Morgenpost building at the time of the attack early Sunday.

The device was thrown into the archive section of the building, setting it on fire. It's unclear whether the arson attack was connected to the Charlie Hebdo massacre.

The German paper reprinted Charlie Hebdo cartoons depicting the Prophet Mohammed after the attack on the satirical magazine's offices in Paris.

The Anonymous hacking collective has vowed to retaliate for the Charlie Hebdo attack.

In online forums Sunday, Anonymous claimed to have blocked at least one jihadist website.