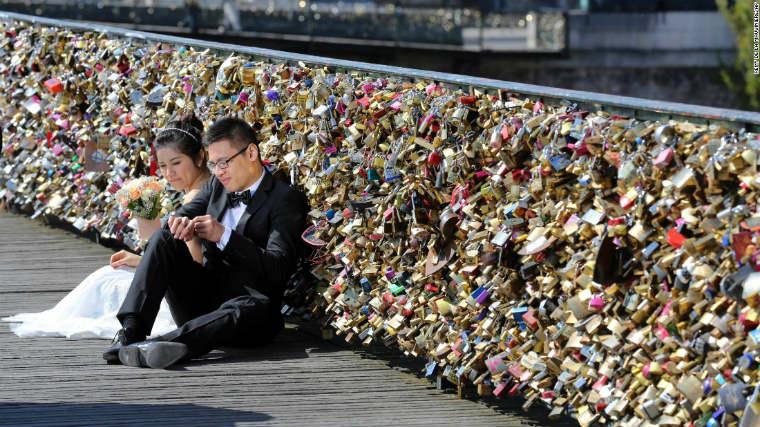 The city of Paris will start removing padlocks from the Pont des Arts on Monday, effectively ending the tourist tradition of attaching \"love locks\" to the historic bridge.

Visitors have been attaching locks with sentimental messages to the pedestrian walkway since 2008 in symbolic acts of affection. Some people further seal the deal by throwing keys into the Seine River below. The bridge carries more than 700,000 locks with an estimated combined weight roughly the same as 20 elephants standing on a bridge designed for pedestrian traffic.

Considered charming at first, the thrill wore off as sections of fencing on the Pont des Arts crumbled under the locks' weight. The phenomenon spread to other bridges, creating two major concerns for the city: \"degradation of property heritage and a risk to the safety of visitors, Parisians and tourists,\" the Paris City Council said on its website.

Graffiti, pickpockets and vendors selling cheap padlocks also became a problem, prompting many locals to avoid the once-picturesque promenade built in the 1800s under Napoleon.

The city launched an unsuccessful initiative in August 2014 to end the practice, urging visitors to instead take selfies on the bridge. Unsightly wooden panels were placed over the locks in February to discourage the practice for Valentine's Day.

Signs in French and English near the bridge said it would be closed for one week while the locks are removed. The effort will pave the way for a temporary \"artistic intervention\" until fall, before the final installation of protective glass panels across the bridge.

Plans for the bridge mirror proposals from citizens' group \"No Love Locks,\" which claimed the padlocks endanger historic landmarks and poses safety threats. As peak tourism season approached this spring, the group called for the city to ban the practice. It also called out brands on social media for featuring the barnacled bridge in ads.

While there's no love lost as far as some Parisians are concerned, some would-be tourists are lamenting the missed opportunity.