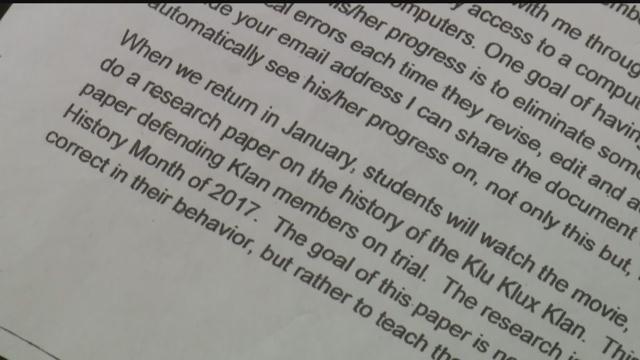 After viewing "To Kill A Mockingbird," her son and other students in the class were asked to do persuasive paper defending Klan members on trial.

The assignment was mentioned on a permission slip. The teacher wrote:

"When we return in January, students will watch the move, "To Kill A Mockingbird" and do a research paper on the history of the Ku Klux Klan. This paper will be a persuasive paper defending Klan members on trial. The research is being done leading into Black History Month of 2017. The goal of this paper is not to teach the students the Klan was correct in their behavior, but rather to teach students how to write persuasively."

"Why would they defend someone they know hated them and has always hated them," said Dorsey. "It would be like asking Jewish children to write about the Nazi's."

Dorsey contacted her son's teacher and the assistant principal, and she left a voice mail for the principal, but he was out of town.

When CBS 58 spoke to Principal Butler this morning, he didn't know about the assignment until Dorsey had complained. As of this afternoon, the school has pulled the assignment.

The Principal reviewed the assignment with the B.E.A.M. board Monday and released this statement:

"The proposed assignment involving research on the topic of the Ku Klux Klan that was recently identified as being planned in one of our 7th Grade English Language Arts classes in January 2017 has been withdrawn.

The teacher recently submitted a letter to the parents of all of her students to simply inform them of various activities and assignments being undertaken in class with this particular assignment being just one of them.  As the teacher stated in the letter to parents “the goal of the research paper was not to teach the students the Klan was correct in their behavior, but rather to teach the students how to write persuasively.”  To the best of our knowledge there was no malicious intent involved.

BEAM feels that the objective of teaching students how to write persuasively is important.  However, we feel that the choice of topic is inappropriate for a 7th grade class.  A new topic will be selected for the assignment.

We understand the concern of the parent who contacted the school.  The principal was out of the office on Friday, 12/16/16 and, thus, unavailable.  He is in the process of trying to talk with the parent to address her concerns.

The teacher, who is African American, has been temporarily removed from the classroom while an investigation is underway.

Families, always feel free to contact the school Administration with any concerns.  We are your partner in the education of your child and working together is the key to success."

After the change, we reached back out to the 7th grader's aunt on the phone.

"Just the fact that they're pulling the assignment is not going to suffice. We haven't heard anything from the school regarding the behavior of the assistant principal," said Patience Phillips.

Both Phillips and Dorsey say the issue has gone too far, and the teachers who didn't take their concerns seriously should be punished.

"She could have easily changed the assignment around and we wouldn't be having an issue right now. It's culturally disrespectful and her as an African American teacher should understand," said Dorsey.