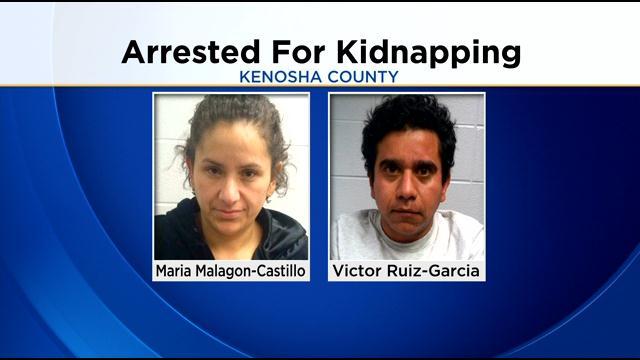 Hidden in plain sight. It's the only way to explain how two kids slipped under the radar and went missing for nearly a decade.

\"I think it's crazy, I mean 9 years and they've been gone, here under everybody's noses and nobody knew it,\"Barbara Reitzel, a neighbor in said.

This bizarre case began in Nevada in 2006, where Maria Rosaline Malagon-Castillo lost custody of her infant daughter and 6-year old son. A Las Vegas warrant shows that during a trial home visit, Maria and the children's father, Victor Ruiz packed the kids and ran, eventually settling down in Pleasant Prairie.

\"Somebody had to have known where they were,” Reitzel said.

During a routine truck stop check on I-94 near the Illinois/Wisconsin border Maria and Victor, a truck driver with a fake CDL, met briefly. Police in Lake County, Illinois stopped and questioned the two and after a name database check found that Maria was wanted for non-custodial parental abduction in Nevada.

\"It's not very often, especially for this long period of time, that you run across something like this,\" Curtis Gregory, a sergeant with the Lake County Sheriff's office said.

After running the info through several agencies, police arrested both parents and found the kids living in a trailer park community in Pleasant Prairie, Wisconsin.

\"They were in good spirits, good health, they were enrolled in school,\" Gregory said.

Neighbors are questioning how it could happen, saying someone should be held responsible.

\"I think someone is to blame, social services, the state of Wisconsin is to blame, the parents is to blame. It's a lot,\" said Jocelyn Haste, who lives nearby.

Police say the family was able to hide for so long because they hadn't gotten into any trouble, or had police contact. The children are being watched by a family member while the Clark County, Nevada Department of Family Services reviews the case. Maria and Victor are being held in Lake County, they will be extradited back to Nevada for charges.