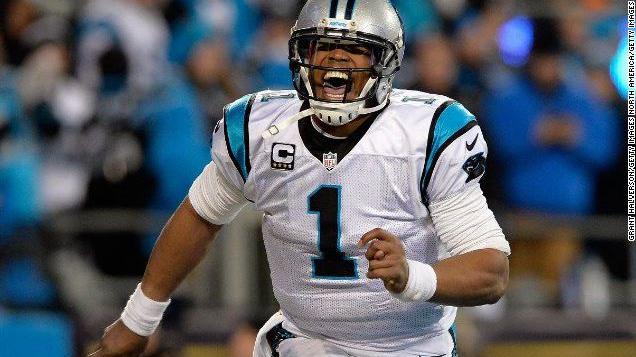 As for the head-to-head match-up, it was lopsided.

The Panthers -- hosting the NFC Championship Game for the first time in franchise history -- jumped on the Cardinals early.

Following a 45-yard field goal by Graham Gano, Ted Ginn Jr.'s 22-yard run gave Carolina a 10-0 lead. Later in the period, Newton's deep pass hit Corey Brown for an 86-yard score to make it 17-0. Newton also added two scores with his legs. Before getting the rest of the night off once the game was out of hand, Newton finished his day 19 of 28 passing for 335 yards. He was responsible for four touchdowns (two passing, two rushing) and had one interception.

Carolina also showed why it led the NFL in the regular season with 39 takeaways, 24 interceptions and a +20 turnover differential.

Palmer was pressured into three first-half turnovers, fumbling twice and also failing to capitalize on the Newton interception, throwing a pick of his own in the end zone just one play later. He also threw two interceptions in the fourth quarter, including pick-six, but the game already was well out of reach by then.

In all, the Cardinals turned the ball over seven times. Six of those were from Palmer (two lost fumbles, four interceptions), who was 23 of 40 for 235 yards passing and one touchdown.