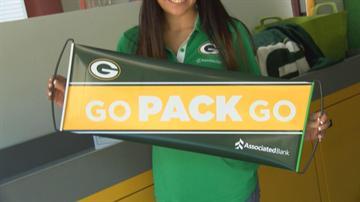 MILWAUKEE -- With the highlights still replaying in her mind, Packers fan Patty Kolodziej didn't mind heading back to class Monday after a big win.

\"I was so excited,\" the MSOE nursing student said.  \" I did not think that would happen at all.  You're supporting your team and you have a good outcome.  It just makes you feel good that you are a Packer fan.\"

Around downtown Milwaukee, most employees in places like Associated Bank's corporate offices felt the same way, actually happy to get to work.

\"It's definitely a better place to be around when they win,\" Kevin McBride said.  \"A couple of the guys and us were talking this morning and rehashing the game and so it was fun to talk about.\"

Other employees know their reaction to a win isn't unique.

\"The fans are so vested in the team itself and the victory and always hoping we're going to the Super Bowl,\" Caralyn Court said.

\"We call it 'Basking in the reflective glory of your team,'\" Dr. Piering said.

But watching the game can also take a physical toll.

That boosts stress and can make you less productive at work.  Dr. Piering says football needs to be an escape, not life-or-death.

\"If you over-identify with your team and they're having a rough year, you're definitely going to feel that, and it could lead to a depression,\" Piering said.

Certainly not a problem for cheeseheads this week.

\"It's healthy to be a Packers fan, not a Bears fan right now,\" laughed Kolodziej.