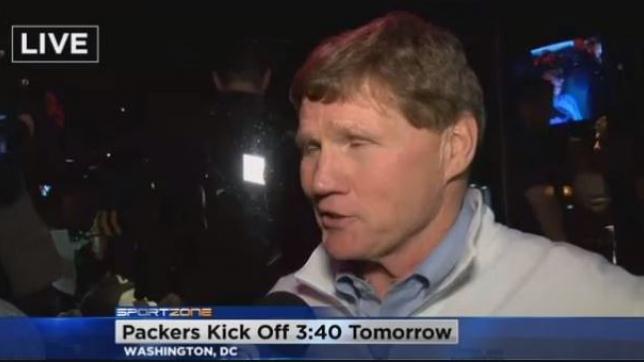 Home or road, the Packers and their fans are used to being part of the playoffs. This is Green Bay's 11th playoff game since the 2011 Super Bowl run. For seven straight seasons, the Packers have been at least among the last six teams standing in their conference.

You can't look past this year's struggles, two straight losses leading in to what's now a road playoff game, but you can say without a doubt the Packers have an edge in experience prepping for the big stage of the playoffs.

“It's playoff football. We're going about our business like we normally do, but obviously the urgency is at playoff urgency. The fact of the matter is we all understand what these games mean,” said Coach McCarthy.

The packers have made their way to Washington DC intent on winning their first road playoff game since that championship run of 2010. Unlike that year, the Packers earned their postseason berth in week 15--and are coming into Sunday’s game losing their last two games instead of winning them.

The Washington Redskins won their division with four straight wins at the end of the season. Two teams trending in separate directions but the Packers know the playoffs mean a brand new season with an opportunity at the ultimate prize still in front of them.

“We're excited about our opportunity. The weather report looks to be good. Those are the things that we're focused on. We're not trying to flip a switch, we're focused on the things we do well and make sure we don't make the big mistake,” said Coach McCarthy.

“It's what they pay us to do. You get paid in the regular season and create your legacy in the postseason. That's what it's all about, these opportunities. You can throw seeds out the window. Whomever executed better is gonna win the game,” said Rodgers.

Unlike past years, the offense hasn't been the strong point going into the postseason. They're ranked 23rd in the league as opposed to the 15th ranked defense.