Packers' injuries will be difficult to overcome 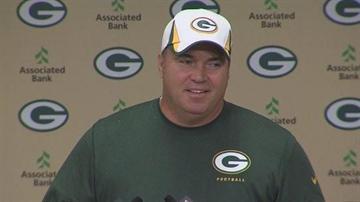 The long list of injuries to key players this season has become very simply put, lengthy.

DuJuan Harris, Bryan Bulaga and Robert Francois are on injured reserve and will all likely miss the entire season.

Derek Sherrod and Jerel  Worthy are on the PUP list. Green Bay's 2011 first-round draft pick practiced the other day for the first time in 22 months.

Clay Matthews, Green Bay's best defensive player, will miss a month with a broken thumb.  Randall Cobb will be out 6-8 weeks with a broken leg.  Nick Perry has a broken foot and is out indefinitely.

Ryan Taylor and James Starks are out for Sunday's game.  James Jones is doubtful and Jarrett Bush is listed as probable.

Some players may be on the field come Sunday, but the long list of impact players sidelined for an extended period of time has now become a theme for Green Bay and head coach Mike McCarthy.  However, he has been steadfast in his answers to media questions about dealing with the adversity this long list of injuries brings.

When asked about the challenges all of the injuries have brought on, in a loose and joking manner McCarthy said, \"We probably worked a little longer on Monday and Tuesday than we normally do, but that's part of it.  You just got to be ready, to be able to get in and out of certain personnel groups and things.  No one is overreacting, you know.  Our theme is \"keep calm and carry on\".  So, for you historians you probably appreciate that.  A 1939  issue by the British government right before World War II in anticipation of the bombing of the major cities.  So, that's what we're talking about.\"

Right after that statement a reporter commented, \"Very impressive\", to which McCarthy responded, \"Thank you, I've been practicing like all night.\"

The whole exchange got a big laugh from reporters and McCarthy alike.  After week long questions relating to the injury topic, undoubtedly coach felt the need for a light-hearted deflection as he tries to prepare his team for the upcoming game against Cleveland.

On a serious note to the injuries, it's clear that studious response has been rubbing off on his players as well.  Experience with the barrage of injuries that befell the team in 2010 has obviously brought about a mentality of overcoming bad luck as a collective unit.  A philosophy no doubt preached and passed down from head coach to players.

\"When you buy into a concept and scheme\", said defensive tackle B.J. Raji, \"that's more effective than buying into particular personnel and players because in a collision sport anything can happen.  And I think it's a credit to the guys that are, I guess, \"spell players\" because they obviously have been paying attention and they are obviously ready for the opportunity.\"

Along those lines of 'being ready for the opportunity', where did Jamari Lattimore come from?  He looked like a savvy veteran instead of a player making his first start.  He was explosive, blew people backwards, was around the ball quickly and decisively and made great plays on the goal line and one-on-one in the flat against Ray Rice.

In Clay Matthews absence, Lattimore and A.J. Hawk really stepped up their play-making ability.  Hawk finished the game with 3 sacks.  He and Lattimore had a combined 7 tackles for loss.  Play like that makes a defense and a fan base forget about losing their star outside linebacker for an entire month with a broken digit.

The players know the importance of having the mentality of \"next man up\".  Saying it and believing it are two completely different things.  The Browns aren't a great team, but they do have the capability to come into Lambeau and upset a team that's been thinned out by injury.  The philosophy is in place, so hopefully the next man up will step up his game as well.