Packers honoring all forms of cancer this year 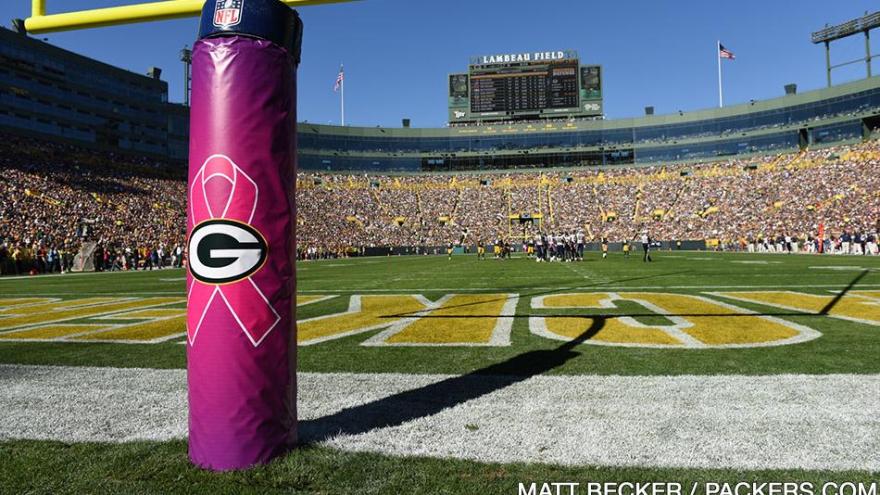 With these enhanced cancer awareness efforts in mind, the Packers are launching Packers Vs. Cancer, an initiative aimed at raising awareness of all cancers.

“Cancer touches the lives of so many families and individuals in our community and we’ve heard from a lot of people over the years who have battled cancer themselves,” said Packers President/CEO Mark Murphy. “We’re proud to show our support by working with Bellin Health and the Vince Lombardi Cancer Foundation to increase awareness and raise funds for all cancers during the month of October.”

Joining the effort is the Packers’ official health care partner, Bellin Health, which will sponsor the October 22 Packers-Saints game at Lambeau Field. The Packers and Bellin Health will recognize cancer survivors on the field during the pregame Ambassador Line, the national anthem and halftime activities. Game attendees can also show their support with the game giveaway banner, which will have a place for fans to write the name of someone they know who has been affected by cancer.

“Day in and day out, our team of cancer care professionals witnesses the devastation this disease can cause for patients and their loved ones,” said George Kerwin, president and CEO of Bellin Health. “And yet we’ve also seen the incredible power of increased awareness in higher screening rates and a better understanding of steps we can take to reduce the prevalence of cancer-causing risk factors and behaviors. We are proud to team with the Packers and the Vince Lombardi Cancer Foundation for this incredibly important initiative.”

The initiative, which will run throughout the month of October, also will feature a variety of fundraising efforts, including the sale of a cancer awareness hat available for purchase at the Packers Pro Shop starting October 10, with $5 from each hat sale going directly to the Vince Lombardi Cancer Foundation.

Named for the legendary Packers coach, the Vince Lombardi Cancer Foundation is dedicated to winning the battle against cancer by funding advancements in cancer research and compassionate care.

"We're beyond grateful for this amazing partnership with the Green Bay Packers organization and Bellin Health," said Ben Haas, Vince Lombardi Cancer Foundation President Elect. "Vince Lombardi said that 'people who work together will win' and together, through Packers Vs. Cancer, we will be one step closer to winning the battle against cancer."

More details about the campaign will be announced soon, including details of how fans and supporters can participate through a “text-to-donate” effort. Additionally, campaign spokesperson, Packers kicker Mason Crosby, will take part in a public service announcement and several Packers players will visit cancer patients in the hospital as a part of the initiative throughout the season.