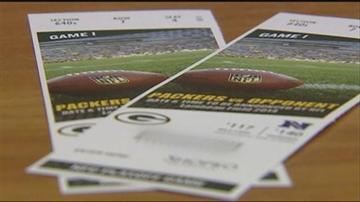 WEST ALLIS -- It's almost unprecedented to hear Lambeau Field isn't sold out for a playoff game. But with tickets still available as of Thursday afternoon, fans have a chance to go, but bad weather and high prices might hold them back.

\"Oh yeah. There's nothing like Lambeau. It's the experience of a lifetime,\" Bryan Brickner said.

\"It's funny you mention that, because we would,\" Jacob Michael Cowan said.

It depends who you ask, but Packers fans seem split on whether they'd attend Sunday's playoff game.

\"We were looking at Ticketmaster last night,\" Cowan said.  \"We're flying out this afternoon but if we were in town, we would definitely be getting dressed up and going to the game.\"

Dressed up is the key.  You'd need a winter hat and winter coat to battle the frigid weather.  But cost plays a part too.

\"I think it has to do with the prices,\" Cowan said.   \"Not only for the tickets but parking and when you get there you're going to spend money. The cold defniitely adds to it.\"

Graf has four season tickets.  He passed on playoff tickets because Aaron Rodgers was out.  He doesn't regret it either.

\"In today's modern era, you have huge televisions, with HD in the basement,\" Graf said.   \"It's almost as good as going to the game. I think people weigh that when they decide to spend a lot of money on playoff tickets.\"

Art Kronenberg thinks they'll sell it out.   But believes the short notice hurts sales because people have to change their schedule.

\"They've got thousands of people showing up on a week's notice,\" Kronenberg said.

Most think the tickets will sell.  And the diehard fans don't want to hear about cold weather.