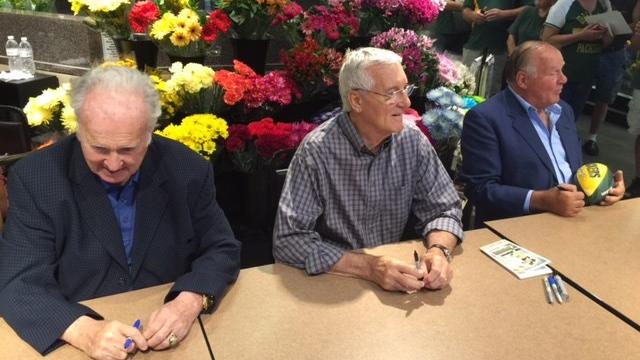 They haven't been on the gridiron for decades, but three legends of the game showed they can still pack 'em in.

Long lines formed Thursday night at the Pick \"N Save on Mayfair Road in Wauwatosa for the chance to get an autograph from Super Bowl Champions Paul Hornung, Boyd Dowler and Jerry Kramer.

The first 300 fans got autographs and the chance to take photos.

\"You got three awesome guys from the Lombardi era that you don't see every day,\" said a grinning Tom Huntstiger. \"Chance of a lifetime in my mind. So, it was totally awesome. Worth the three hour wait.\"

Folks brought all sorts of mementos.

They shared a few laughs and some quick stories.

A brush with greatness at the grocery store in Tosa.