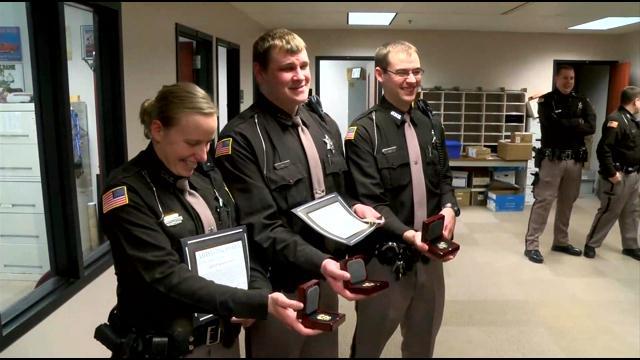 Deputies Becky Swanson, Nicolas Depies, and Jaimie Byrnes along with Grafton Police responded to a call of shots fired at a home.

They could hear the woman crying inside. The suspect shot her in the leg, shattering her femur.

\"Grafton Police Sergeant Sutherland applied direct pressure to the wound while the deputies applied a tourniquet stopping the loss of blood,\" explained Ozaukee County Sheriff Jim Johnson. \"Treating physicians restored 9 liters of blood to the victim and credit the deputies and the sergeant with saving her life.\"

The suspect also shot at the deputies before running out of bullets and surrendering.

But even then he didn't stop. The deputies were spat on and kicked as they brought him into custody.