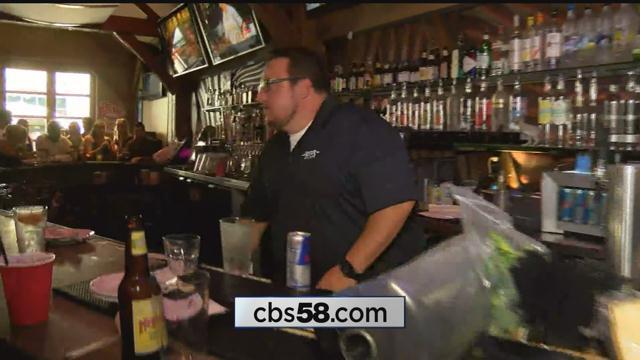 A one-star Yelp rating of a Milwaukee restaurant is going viral because of the response from the restaurant's owner.

Two weeks ago, a reviewer posted about the Karma Bar and Grill saying the menu was "basic", and in the seven times he had been there he'd never had a good meal.

“I'm not trying to tell this person he's wrong, but I'm trying to get some perspective as to how can someone walk into a restaurant that works as hard as we do to do what we do every day and be here seven different times and not enjoy themselves at all.  And then if you haven't enjoyed yourself that many times, why would you continue to come back,” said Ari Dominitz.

Two weeks ago, a Yelp reviewer posted this review:

“I’ve never been a fan of Karma, and I don’t get why people like or why my friends insist on coming here frequently. The drinks are overpriced. The service is hit or miss. The menu is very basic. I’ve never had a good meal here despite having been here about 7 times. The only cool things about Karma are the back patio and the open mic night for comedians.”

There really is nothing better than this fantastic open forum of internet based criticism that allows someone to pop on at will and completely bash a small business owner’s livelihood. It’s just awesome that while you have given 3 stars to gas stations and Taco Bell franchises, you felt compelled to jump on Yelp, the app that tells it like it is, and sling mud because you’ve got something to say and everyone needs to hear it! So you attack my business, which despite my best efforts, has just left you no choice but to go online and give a 1 star review. Let’s address your other review and brilliant insights one by one and see if we can’t figure out where exactly I’m failing you and where Taco Bell is just handing me my proverbial ass.

“This place is fine. Great selection for just about anything a college student would need. Average service from the employees. Panhandlers outside. It is what it is.”

So… 7-11 gets 3 stars because they have a great selection of drinks… SHOCKER… they have a variety of Drinks at 7-11. BUT… the Minimum wage employee who is watching you peruse the vast selection of flavored iced teas and various chemically flavored slushified drinks, just didn’t attack his job with the kind of zeal that makes you feel comfortable with a 4-star review. Finally, what the hell is 7-11 thinking by letting those damned transient, swarthy, degenerate panhandlers camp out in front of their store. Heavens to Betsy… 3 stars indeed!!

Moving on to your grippingly poignant 2 Star critique of Starbucks

“Busier than most Starbucks. Like way too busy. I couldn't get work
done here. Great employees. It sucks having the occasional panhandler outside. The layout of the building is awkward. Not the best Starbucks I've been to, but hey, it's conveniently located. My standards for a Starbucks are slightly above this, so no 3 stars. I'd give it 2.5 if I could.”

Like the modern day Sophie’s Choice… 3 stars… or… 2 stars… honestly, I am so proud of you for being… so…very… brave. How dare they have the audacity to be BUSY! After all, it’s not like they are a publicly traded company with a desire to MAKE MONEY!! I mean c’mon people, could you please stop your annoyingly inconsiderate capitalism! I’m trying to work… in this public space… where the largest coffee shop company on the planet deemed they could make money. Clearly they didn’t get your memo about standards or expectations! After all, if they had read your brilliant 7-11 review, they would have had the panhandlers removed prior to your arrival. Honestly… where is the 2.5-star button when you need it. Perhaps Yelp itself is in need of one of your scathing reviews. It’s a Cake Pop for thought.

” This restaurant feels too upscale for the poor service, pub menu, and poorly dressed clientele. This place feels like it should be fine dining, but instead, the food is merely glorified bar food. The burgers are delicious, but I want more from this restaurant. It feels too classy for people to be wearing shorts and t-shirts and for the food to not be of a higher quality.”

Elsa’s has been “the place to be seen” in Milwaukee, for nearly 3 decades. Karl Kopp is the definition of “Local boy makes good”. Elsa’s has been serving a diverse crowd of Milwaukee clientele for longer than you’ve been alive and they do it better than nearly anyone in Milwaukee. Their staff is dressed well, knowledgeable and professional. But you give them 2 stars because they aren’t upscale enough for you. It’s much more than bar food, its Salads, Tuna Steaks, Amazing appetizers, Carnegie Deli Cheesecake from New York City and some of the best wings on the planet. But you give the business a 2-star review because the clientele wasn’t dressed to your liking… would you like to know where Elsa’s would be if they ever attempted to restrict their clientele based on their attire? I’ll give you a hint… See 2 Buck. You rate the restaurant 2 stars because they don’t turn away paying customers in shorts and t-shirts. You know what Elsa’s does year in and year out? They MAKE MONEY and they get nationally recognized and they’re in a dozen categories in the annual “Best of Milwaukee” polls. But you sir… simply want more from this restaurant… never mind that Milwaukee has shown time and again that they LOVE Elsa’s for all the reason’s you don’t… but you, like mama, know best.

As I take the time to ponder how to respond to your one-star review of my small business, that I work hard at, put my life into and use to support my hard working wife and 2 kids, I’m struck with an overwhelming sense of calm. Initially, I was shaken, I was worked up, thrown for a loop and nearly… nearly… pissed off. Then I took a deep breath and reread your review. You’ve never had a good meal here, you find our menu basic (8 proteins, 4 smoked in house, 90% scratch menu, locally sourced bread and produce… clearly not up to Taco Bell’s 3 star standards). Overpriced drinks ($4 rails, $5 calls, Taps range from $3 - $7 and we have a weekday 4 hour happy hour and a 7 day a week 3 hour late night happy hour) … and our hit or miss service, which much like Starbucks and 7-11 is simply not up to your high standards. But then my favorite part… you’ve been back 7 times… you keep coming back… blame your friends, laude my patio, kiss the comedians assess, who cares. The reality is you keep coming back despite the fact, and I quote, “I don't get why people like it or why my friends insist on coming here frequently”.

So let me help you out buddy, if your friends all like it, if people keep suggesting you come here, and they all seem to have a good time and enjoy the food. If they somehow find a way to afford the sky high prices and brave the onslaught of hit or miss service… what are the odds that they’re all blind you’re the legendary cyclops. Let me posit a fleeting suggestion and then by all means let’s go hit up Open Pantry for their veritable cornucopia of never ending drink choices for college aged sages. Maybe… just maybe… you have no freakin’ idea what you’re talking about. Maybe, you just can’t seem to appreciate a locally owned bar, with 17 tap beers and a great cocktail menu. Is it possible that you are somehow unable to enjoy an Angus Beef Steak Blend Burger topped with locally sourced cheese and veggies with a side of crispy waffle fries, tots or our made to order 6 cheese mac & cheese and appreciate food that wasn’t microwaved by someone trying to figure out how they turned Doritos into Taco Shells? Maybe… despite the fact that you clearly wouldn’t know a good pub meal if it bit you on your pampered little tush… maybe, I’ll just let it go. Ask for me next time you come in to be dissatisfied, I’ll buy you an overpriced drink and try to see if I can get the kitchen to whip you up a Cheesey Gordita Crunch. By the way… have you heard about our loyalty program?”