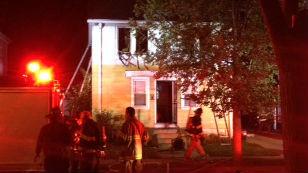 The Milwaukee Fire Department was called out to a house fire in the 4400 block of N. 26th St. shortly after 1 a.m. Friday morning. The fire was confined to a second floor bedroom of a single family home.  There were two people in the home at the time of the fire and were able to evacuate before firefighters arrived.  The occupants did complain of some breathing problems, but did not seek treatment.    Damage to the building and contents is estimated at $45,000.  The Red Cross is assisting the occupants of the home.  the fire remains under investigation.