Over 50,000 show up for Ariana Grande benefit concert in Manchester 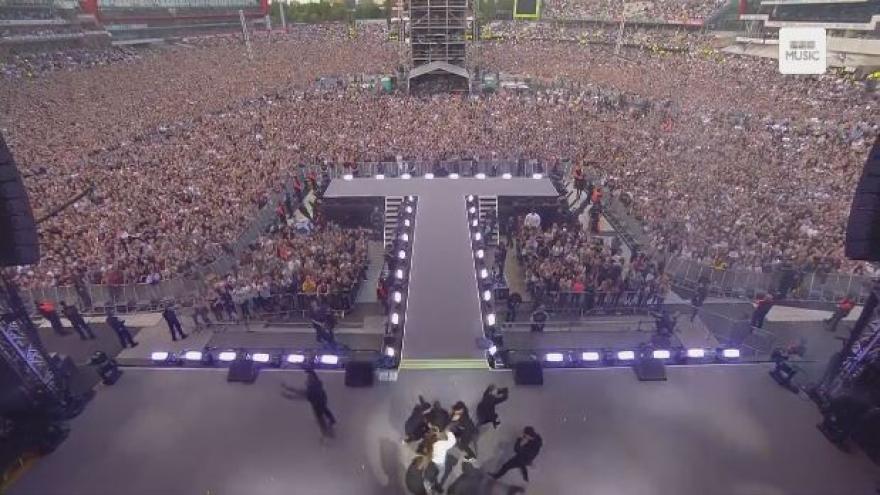 (CNN) Ariana Grande returned Sunday to Manchester to honor the lives of those lost there.

The singer and some of her famous friends held a benefit concert in the English city to benefit the victims of a terrorist attack that took place following her performance there nearly two weeks ago.

Grande appeared emotional as she performed some of her hits, including "Break Free."

"I love you Manchester," she yelled to the crowd.

Grande wore a white sweatshirt with "One Love Manchester" written on it. She also performed "Better Days" with Victoria Monét, and sang "Where is the Love" with the Black Eyed Peas.

Grande's manager, Scooter Braun, noted that the singer performed her first concert in Manchester exactly two years before. He thanked everyone for attending despite a terror attack in London the day before.

"Manchester, your bravery is our hope," Braun said. "As unfortunately we saw yesterday, evil will test us, it will show its face again. But because of you we can now represent through this as a world wide community that we will be ready, we will be fearless we will be great and we will honor our children."

Braun said a TV broadcasting the concert was set up at Royal Manchester Children's Hospital, where some victims were still recovering.

Marcus Mumford of Mumford and sons opened the show with "Timshel," followed by the Manchester pop group Take That.

Singer Robbie Williams then took to the stage to lead the audience in a rousing rendition of his Manchester tribute song, "Strong."

Pharrell Williams praised the people of Manchester for their resilience.

"I don't feel or smell or hear or see any fear in this building. All we feel here tonight is love, resilience, positivity," Williams said before he launched into his hit song, "Happy" with an assist from Miley Cyrus.

Some concertgoers clutched signs reading "For our angels" in tribute to the 22 people who were killed and dozens more injured when a suicide bomber set off a blast following Grande's concert at Manchester Arena on May 22.

The sold-out "One Love" benefit follows another deadly attack that rocked London late Saturday when three men drove a van into a crowd before stabbing people in nearby bars and restaurants.

Seven people were killed and 48 were injured in that attack.

Officials tightened security for Sunday's concert. Before the show, Grande's manager Scooter Braun released a statement vowing that the show would go on.

"All artists involved have been unwavering in their support this morning and are determined to carry on with the show," he said. "We ask the strong city of Manchester and the world to join us in making the statement that hatred and fear will never win."

On Friday, Grande visited some of her injured fans at the Royal Manchester Children's Hospital.

She shared some photos of the visits on her social media account.

The superstar brought each a sunflower and a teddy bear, according to Lauren Thorpe, whose eight-year-old daughter, Lily, suffered a shrapnel wound in her back as a result of the bombing.

The Guardian reported that Lily was released from the hospital in time to attend the benefit concert.

American fans were able to watch the concert on the cable channel Freeform, as well as Grande's YouTube and Facebook pages.

All proceeds from the event will go toward the "We Love Manchester Emergency Fund," in partnership with the British Red Cross and Manchester City Council.