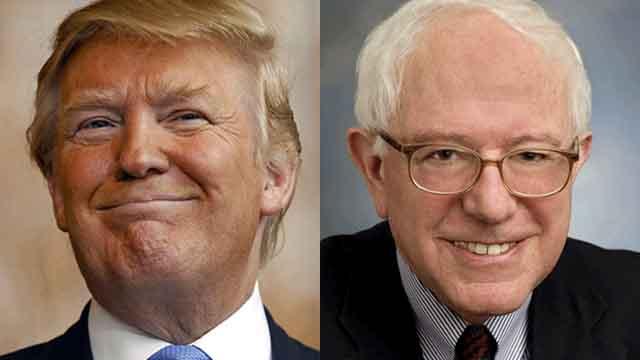 (CNN)Republican Donald Trump and Democrat Bernie Sanders swept to thumping outsider victories in the New Hampshire primary on Tuesday, seizing on the fury of grass-roots voters to rock the elites who control American politics.

But the nation's second presidential contest failed to clarify the battle between establishment candidates. There are doubts about Kasich's viability in more conservative states and ability to raise money. Marco Rubio faces renewed questions about his readiness after a shaky debate performance robbed him of momentum. And Jeb Bush, the one-time front-runner, did just enough to survive.That means the opposition to Trump and Iowa caucuses winner Ted Cruz remains divided.

Trump, a brash businessman and reality TV star who has never run for office, and Sanders, a self-declared democratic socialist, were both seen as long-shot outsiders when they launched their campaigns. Their victories reflect deep bipartisan anger at professional politicians and suggest that both the Democratic and Republican races will now be long, acrimonious struggles that could stretch well into the spring.New Hampshire also delivered a painful personal blow to Hillary Clinton, who squeezed out the narrowest of victories in Iowa last week. The scale of her defeat — by more than 20 points — is likely to fuel signs of growing internal rancor in her campaign and complaints by Democrats that her message as a progressive who gets results is no match for Sanders' heady demands for a political revolution, which has inspired younger Democratic voters.

The loss was especially rough because New Hampshire has long been kind to the Clintons. It's the state that made Bill Clinton the "comeback kid" in 1992. And Hillary Clinton beat Barack Obama there in 2008, salvaging her campaign after a third-place showing in Iowa.

Trump, relishing a victory that restored luster to his claim to be one of life's perpetual winners, which lost some sheen after his second in Iowa, took to the stage at his victory party with a beaming smile and a thumbs-up after defying doubters who had questioned whether he can turn stellar poll numbers into actual votes.

"Wow, wow, wow," Trump said. "We are going to make America great again!"He spoke in unusually personal terms about his family during his acceptance speech.

The real estate mogul's win is likely to send shudders through the Republican establishment, which fears his explosive rhetoric targeting women, Mexicans and Muslims could hamper the GOP's chances of appealing to a general-election audience.

A hoarse but jubilant Sanders proclaimed his victory to be the result of a "huuuuge" turnout. His emphatic performance will now propel him into a nationwide battle against Clinton as he attempts to shatter the firewall among ethnically diverse voters that she has built in South Carolina and other Southern states."Tonight, we have sent a message that will echo from Wall Street to Washington, from Maine to California," he said, before predicting that the race against Clinton was going to quickly get even more contentious.

Clinton appeared in her concession speech to be trying to co-opt Sanders' message about an economy stacked against the middle class.

"Now we take this campaign to the entire country. We are going to fight for every vote in every state," she said, foreshadowing a long fight for the nomination that she was once expected to win easily.

"People have every right to be angry. But they are also hungry. They are hungry for solutions," she said, adding that she wanted to rein in Wall Street. "But I know how to do it," Clinton said, implying that Sanders' calls for a revolution were unrealistic.At 11:15 pm ET, with 75% of Republican votes counted, Trump had 34%. Kasich had 16% and Cruz, Bush and Rubio were tied at 11%. Chris Christie may have hurt Rubio but he didn't do much to help himself and was trailing at 8%. The somber New Jersey governor said he would return home to consider his position, but there was every indication his White House race is now at an end.

On the Democratic side, Sanders led Clinton 60% to 39%. His gaping margin of victory dwarfed the few tenths of one percent by which the former secretary of state prevailed in the Iowa caucuses last week.The tightly bunched race behind Trump on the Republican side set up an intriguing clash between Rubio, Kasich and Bush in the next battleground of South Carolina, which favors a much more hard-knuckle brand of politics than New Hampshire.

Kasich declared that something "big happened" in New Hampshire that could give him the chance to expand his campaign across the country. The Ohio governor will especially eye Northern and Midwestern states such as Michigan, Pennsylvania and Illinois, where he message could resonate — if he can stay in the race that long.

"There is magic in the air with this campaign," Kasich said.

It was also a good night for Cruz, who was on course to finish third in a state that is much less less receptive to his social conservatism than Iowa.

A chastened Rubio admitted that his debate performance on Saturday in which he was roasted by Christie for repeatedly reciting sound bites was to blame for his disappointing showing.

"I did not do well on Saturday night," he said. "That will never happen again."