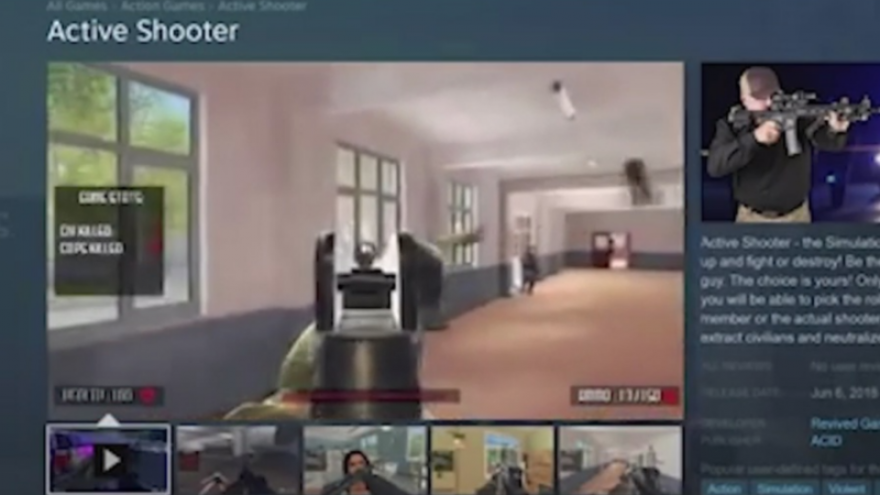 (CNN) -- A much-criticized video game that would let players shoot up a school has been pulled from a digital storefront just days before its release.

The PC game, "Active Shooter," was set to be released June 6 on Steam, an online gaming store and platform owned by Valve Corp., a video game developer.

News of the game's release had sparked widespread outrage, including among students and parents at Marjory Stoneman Douglas High School in Parkland, Florida, where 17 people died in a shooting in February.

Marketing materials for the game, developed by Revived Games and published by a Russian company called Acid, promised to let players choose between portraying a SWAT team member responding to a shooting or portraying an actual shooter whose objective was to "hunt and destroy."

Valve sent a statement to CNN on Wednesday saying they removed Revived Games and Acid from its Steam platform due to past misbehavior.

In the statement, Valve spokesman Doug Lombardi said the game's developer and publisher is a man who had been banned from Steam last fall when he was operating under a different name. Lombardi described the developer as "a troll, with a history of customer abuse, publishing copyrighted material, and user review manipulation."

Valve discovered the man was the developer behind "Active Shooter" when they began investigating amid controversy surrounding the upcoming game, Lombardi said.

"We are not going to do business with people who act like this towards our customers or Valve," he added.

Revived Games and Acid did not respond Wednesday to requests for comment.

News of the game's upcoming release had drawn fierce criticism in recent days from classmates and parents of students slain in Parkland, who demanded Valve remove the game from its platforms.

THIS IS DISGUSTING. Valve Corporation of Bellevue is launching a video game on June 6th that’s a school shooting simulator. Everyone that cares about school & public safety should be OUTRAGED. Sign this petition to DEMAND the game isn’t launched: https://t.co/oQibZgGWWq

"THIS IS DISGUSTING... Everyone that cares about school & public safety should be OUTRAGED. Sign this petition to DEMAND the game isn't launched, " Jaclyn Corin, a survivor of the Parkland shooting, tweeted Tuesday.

CARROLLTON, Texas (CBSDFW.COM) – Even as families at the center of the nation’s most recent school shooting continue to bury their dead, the backlash is building over a new video game that allows players to simulate the role of gunman in an active school shooting.

“It’s probably not a good time to have a game where you’re running around shooting civilians in a school setting,” says local gamer Evan Kice. “People are dying. Children are dying because of this [school shootings].”

Other gamers at a Carrollton game lounge also weighed in, suspecting that the game called ‘Active Shooter’ looks to profit off of shock value.

“I don’t think this is something that a lot of people are going to accept,” adds Vince Bowery. “Gamers are just normal people, who are trying to have fun with the game. People who play something like that… they’re going to be really young and don’t understand what they’re interacting with, they just think it’s cool.”

But, area police say ‘cruel’ and ‘crass’ are better descriptions.

Thousands have signed an online petition trying to block the game’s planned June 6th release. The developer has acknowledged the criticism, but released a statement defending it saying “…this game does not promote any sort of violence, especially any sort of a mass shooting.

Active Shooter is essentially a dynamic SWAT simulator in which dynamic roles are offered to players.”

“This is reprehensible for a company to create a video game that portrays one of the most pressing issues in our society right now. Pretending to be an active shooter in a school setting is not funny and should be avoided by parents and gamers to send a strong message that we will not allow our communities to become more desensitized to violence,” said Lt. Cook.

According to Lt. Chenault, working to prevent, and even responding to hoax threats have become a very real concern for local police. It is too real, they say, to become entertainment.

“These events really do occur,” says Lt. Chenault. “These events happen to real people, the first responders respond to it, the parents respond to it, the school districts, the communities are left to deal with these things. To try to capitalize and make money off of something so outrageous, just leaves me dumbfounded, for lack of a better term, or at least a term that can be expressed on television.”

Of course, police and gamers are parents too. And when asked if his would get to play, Bowery responded quickly: “Oh, my God, no.”