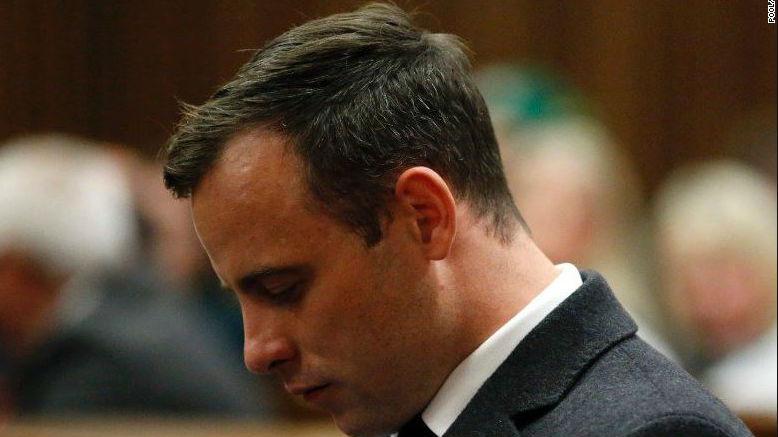 (CBSNews) PRETORIA, South Africa -- A South African judge sentenced Oscar Pistorius on Wednesday to six years in prison for murdering his girlfriend, Reeva Steenkamp, in his home on Valentine's Day 2013.

The double-amputee former Paralympian and Olympian hugged family as he arrived at the Pretoria courtroom Wednesday morning, and then sat stoically as Judge Thokozile Masipa explained the background to her decision before announcing the sentence.

"I am of the view that a long term of imprisonment will not serve justice in this matter" said Masipa just before handing down the six-year sentence. She noted that Pistorius was a first time offender, and that he is "not likely to re-offend."

His lawyers can appeal the new sentence.

Barry and June Steenkamp, the slain woman's parents, sat across the courtroom from Pistorius on Wednesday. They showed little emotion over the verdict, but her father appeared disappointed.

Pistorius had faced a possible sentence of up to 15 years in jail for his conviction on the charge of murder for shooting Steenkamp through a locked bathroom door. He has maintained throughout the trial that he believed she was a late-night home intruder barricaded in his bathroom.

He has insisted that he believed Steenkamp was still asleep in their bed.

As CBS News correspondent Debora Patta has reported, Pistorius has served less than one year of his previous five-year sentence on the manslaughter charge.

The defense argued that he has paid for his crime already with his deteriorating health, his aborted future and his mental state, which they said had also deteriorated into extreme depression and post-traumatic stress disorder.

They want a custodial sentence; one where Pistorius would be released under the guardianship of his family and spend the rest of any jail term under house arrest.

To slam their point home ahead of the sentencing, defense attorney Barry Roux asked Pistorius to come forward at an earlier hearing and show the court who they were really sentencing. At this, Pistorius stepped forward, removed his prostheses and hobbled awkwardly around the court on his stumps.

The move elicted gasps of horror from the public gallery. Some spectators broke down crying, others muttered that it was a "cheap shot" by the defense.

When Pistorius' painful walk came to an end, he collapsed sobbing.

The state prosecution remained unmoved, however arguing that the real victim in the case was Reeva Steenkamp, Pistorius' beautiful model girlfriend who he killed on Valentine's Day night in 2013.

Prosecutor Gerrie Nel called in that hearing, on June 15, for the standard minimum sentence for murder in South Africa of 15 years.