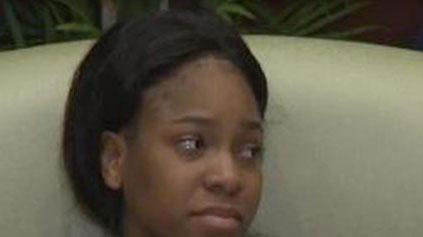 ORLANDO (CBS NEWS)- Patience Carter went to Orlando with a friend's family on vacation, and ended up one of the few surviving witnesses to the last moments of the worst mass shooting in American history.

Carter, 20 years old, had fled into the bathroom of Pulse nightclub during the Orlando massacre, and as the situation was winding down, she said the gunman told police negotiators on the phone that he pledged his allegiance to ISIS, and that he wouldn't stop his assault until America stopped bombing his country.

Carter said after he hung up the phone, he "started speaking in Arabic," but she said she wasn't sure to whom, and then he had a question for the others cowering in earshot.

"Are there any black people in here?" Mateen asked, according to Carter.

She said she was too afraid to reply, but another black person hiding in the bathroom did.

"I don't have a problem with black people," Mateen reportedly said in reply. "This is about my country. You guys suffered enough."

Pulse was attacked on Latin night, and many of those killed were from Puerto Rico, although there are other ethnicities among the dead.

As more victims of the shooter come forward, deeply harrowing descriptions of survival and loss are coming to the public's attention.

Carter described a bloody scene in the bathroom of Pulse nightclub, where survivors had sought refuge from the rampage that started out in the club, only to find themselves locked in with Mateen just before police breached a wall to get at him.

As she was lying on the floor looking over the "piles" of bloody bodies in the bathroom, she said she "made peace with God and within myself."

Carter said she asked God to take her away so the pain would stop.

After a while, police began shouting warnings to survivors to move away from the bathroom walls so they could blow them open, Carter said the gunman carefully executed a final three people, including a stranger who was shielding her.

"If it wasn't for that person shielding me it would've been me shot and I wouldn't be sitting here today," Carter said.

After the breach, she said the firefight was terrifying, and the explosives broke the pipes in the walls, sending water flooding into the bathroom. Carter said she was afraid of drowning "in bloody water," as police attempted to clear the room of any remaining danger.

While some have questioned the police decisions that night, Carter said she did not based on what she heard him saying, adding: "He wasn't going to stop killing people till he was killed."

When the dust cleared, Carter said she went to check on the two friends she had gone dancing with. One of them, Tiara Parker, was wounded but alive. Another,Akyra Murray, did not make it.

Carter said she was struggling with being a survivor.