Oregon Standoff: Ammon Bundy Asks Colleagues to go Home. But Will They? 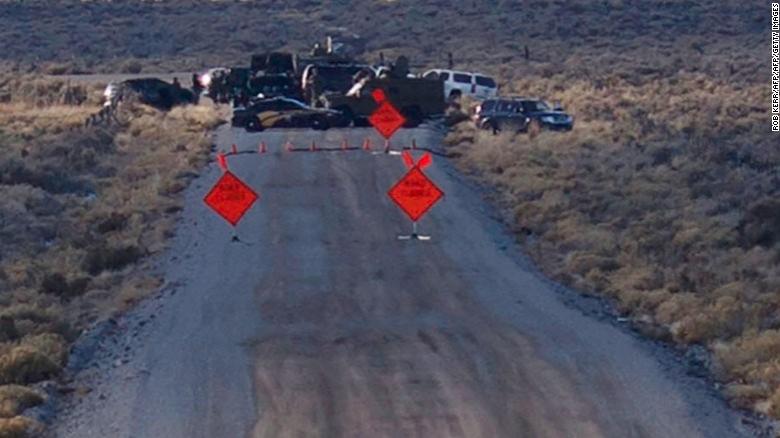 "Go home and hug your families," protest leader Ammon Bundy said in a statement a day after multiple protesters were arrested and another was shot and killed during a traffic stop. "To those remaining at the refuge, I love you. Let us take this fight from here. Please stand down."

It's unknown how many of the occupiers will take heed, but their numbers certainly are dwindling.

Eight people left the refuge on Wednesday. Three of them were arrested, including one of the new leaders of the group, Jason Patrick.

Each faces a federal felony count of conspiracy to impede officers of the United States from discharging their official duties through the use of force, intimidation or threats.

"All were in contact with the FBI, and each chose to turn himself into agents at a checkpoint outside the Malheur National Wildlife Refuge," an FBI statement said. "The arrests were without incident."

Earlier the occupiers had told Oregon Public Broadcasting's John Sepulvado, who was reporting on refuge grounds, that they were prepared to die.

"I just spoke to the new leaders -- including Jason Patrick -- They say that 5-6 (people) had a meeting, and by consensus they decided to stay," Sepulvado wrote Wednesday morning on Twitter.It's uncertain why the eight decided to come out when they did.

Eight others were arrested a day earlier -- seven of them in Oregon.

Joseph Donald O'Shaughnessy and Peter Santilli were arrested in Burns, about 30 miles from the refuge.

An eighth person was arrested in Arizona.

All of the people arrested on Tuesday face a federal felony charge of conspiracy to impede officers of the United States from discharging their official duties through the use of force, intimidation or threats, authorities said.

According to charging documents, a source told a Harney County officer that the group had explosives and night vision goggles and weapons, and that "if they didn't get the fight they wanted out there they would bring the fight to town."

It wasn't immediately clear how many remained at the refuge.Killed during Tuesday's traffic stop and arrests was LaVoy Finicum, one of the most vocal occupiers who took over the refuge building near Burns.Earlier this month, the father of 11 told CNN he did not want to die -- but would never go behind bars.

"I'm just not going to prison," Finicum said. "Look at the stars. There's no way I'm going to sit in a concrete cell where I can't see the stars and roll out my bedroll on the ground. That's just not going to happen. I want to be able to get up in the morning and throw my saddle on my horse and go check on my cows. It's OK. I've lived a good life. God's been gracious to me."

News of Finicum's death quickly reached the protesters still holed up at the refuge building.

"It appears that America was fired upon by our government," the occupiers said on the Bundy Ranch Facebook page. "One of liberty's finest patriots is fallen. He will not go silent into eternity."

The occupiers claimed Finicum had his hands in the air when he was shot.

A representative from the Joint Information Command Center in Harney County said authorities had no comment on the claim that Finicum had his hands up. He said more information would be released.

"He was a wonderful man," he told KTNV. "He was a student of the Constitution. He was interested in freedom, and I think he gave his life where he felt it was best."Now 27 days into the occupation, the question is: How much longer?

Ammon Bundy and others started out protesting the sentencing of Dwight Hammond and his son Steven, ranchers who were convicted of arson on federal lands in Oregon.

But a January 2 march supporting the Hammonds led to the armed occupation of the refuge, with protesters decrying what they call government overreach when it comes to federal lands.

In telling the remaining occupiers to go home, Bundy said their fight now rests in the courts.

"We need to step back. Somebody died yesterday," attorney Mike Arnold told reporters Wednesday. "Mr. Bundy wants everybody to remember that somebody died, and this is not just about him right now."

Arnold spoke after Harney County Sheriff David Ward blamed the occupiers for the death of the outspoken protester."Multiple agencies put a lot of work into this to put the best tactical plan that they could to arrest them peacefully," said Ward. "(The death) didn't have to happen. We all make choices in life. Sometimes our choices go bad."

A law enforcement official told CNN that officers opened fire when Finicum reached toward his waistband, where he had a gun.

With their leader arrested and a fellow protester killed, the FBI tried to assert more control Wednesday, setting up checkpoints on roads heading to and from Malheur National Wildlife Refuge.

"We don't arm up and rebel," said Ward, urging everyone involved in the occupation to "move on."