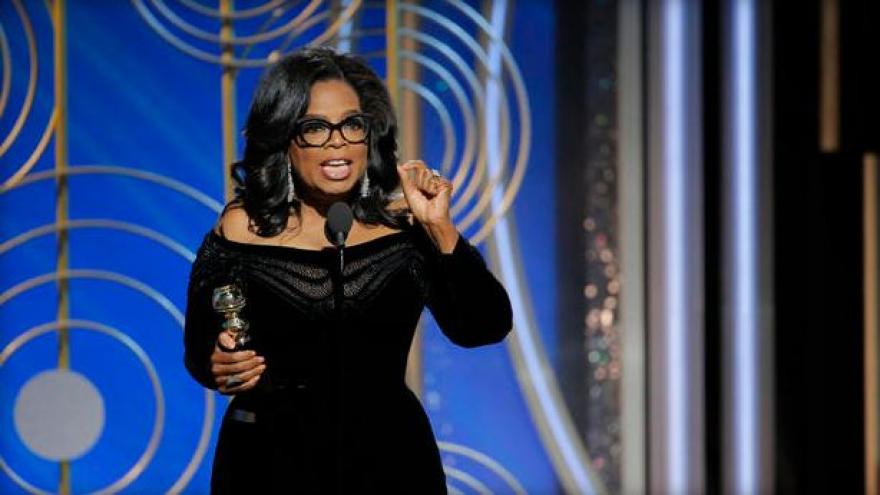 (CBS News) -- Oprah Winfrey accepted a lifetime achievement award Sunday night at the Golden Globes in Beverly Hill and her inspiring and stirring speech reverberated nationwide. She hopes by accepting the Cecil B. DeMille award, the first black women to do so, has an impact on young girls. She said she remembered watching Sidney Poitier as a little girl in Milwaukee.

"At this moment, there are some little girls watching as I become the first black woman to be given this award," Winfrey said Sunday. "I want all the girls watching to know: A new day is on the horizon. When that new day finally dawns, it will be because of the magnificent women and many of them are in this room tonight."

"Speaking your truth is the most powerful tool we all have," said Winfrey. "I am especially proud of all of the women who have felt strong enough and empowered enough to speak up and share their personal stories. Each of us in this room are celebrated because of the stories we tell and this year, we became the story."

"For too long, women have not been heard or believed if they dared speak the truth to the power of those men. But their time is up," Winfrey said.

Winfrey continued and said the story transcends any culture, geography, politics or workplace. She thanked all of the women who have endured "years of abuse and assault."

Winfrey also talked about the legacy of Recy Taylor, a black woman who was gang-raped by six women in 1944. Taylor died 10 days ago, Winfrey pointed out. She talked about the powerful men like those who got away with raping Taylor and said, "But their time is up. And I just hope that Recy Taylor died knowing that her truth, like the truth of so many other women who were tormented in those years and even now tormented, goes marching on."

The audience gave a standing ovation as Winfrey asked everyone to do their part to make sure that one day, "No one has to say 'Me too' again."