Operation to Take Back Mosul Moving Faster than Expected 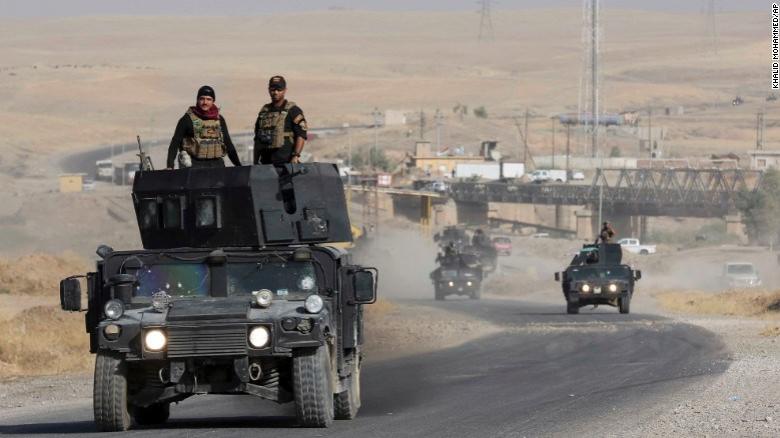 Near Mosul, Iraq (CNN) The operation to liberate the Iraqi city of Mosul after more than two years of brutal ISIS rule is going faster than expected, Prime Minister Haider al-Abadi said Thursday, after Peshmerga fighters opened a new front from the north, tightening the circle around their target.

An Iraqi-led coalition of forces launched the operation to free Mosul on Monday with more than 100,000 people closing in on the strategic city, seen as the cultural capital of ISIS's envisaged caliphate, or so-called Islamic State.

Forces have faced fierce resistance in some pockets, coming under heavy gunfire and suicide bomb attacks, but overall the operation has made sweeping gains, apparently freeing dozens of villages in districts around Mosul.

"The fighting forces are currently pushing forward toward the town more quickly than we thought and more quickly, certainly, than we had established in our planned campaign," Abadi said, according to a translation, via teleconference to a ministerial-level meeting on Mosul in Paris.

"Our road forward is a long one, and we need to continue to work to destroy terrorism and out and end to this kind of destruction."

As reports emerge of people remaining trapped in Mosul and others being dragged into abandoned towns as human shields, there is growing concern of a bloody toll on civilians as coalition forces bombard targets in support of ground forces.

Abadi said he had instructed "the military on all the fronts to open corridors to citizens and IDPs, to all the people who want to flee the fighting."

The Peshmerga said its offensive, on three fronts, would capitalize on gains made by Kurdish and Iraqi forces in recent days, according to a press release on Thursday from the the Peshmerga's General Command.

"The objectives are to clear a number of nearby villages and secure control of strategic areas to further restrict ISIL's movements," the statement said, using an alternative name for ISIS.

Around 40,000 Peshmerga fighters are taking part in the operation with Iraqi security forces and several paramilitary groups, including Shia, Christian and other minority groups.

The new offensive centers on an ISIS-held Christian village, Batnaya, about 20 kilometers north of Mosul, captured by ISIS in 2014.

Iraqi forces and a Christian paramilitary group surrounded another Christian town -- Hamdaniya, also known as Qaraqosh -- on Wednesday and are still battling ISIS fighters there, who have put up a fierce resistance. Militant targets there were also bombarded by coalition forces Wednesday.

The coalition's 100,000 or so members vastly outnumber their opponents. Up to 5,000 ISIS fighters are in Mosul, a US military official said. The terror group's supporters put the number at 7,000.

Peshmerga forces have discovered several ISIS tunnels -- part of the group's elaborate defenses. In some, dishes of food were still warm, showing how close forces are coming to fighters before they flee.

Meanwhile, a US general claimed that some local ISIS leaders are fleeing the city.

"We are telling Daesh that their leaders are abandoning them, and we have seen movement out of Mosul," US Army Maj. Gen. Gary Volesky said in a video briefing from Baghdad, referring to ISIS by its Arabic acronym.

Since Mosul's capture by ISIS fighters in June 2014, Mosul has been a vital stronghold for ISIS.

The largest city under ISIS control in Iraq and Syria, it was the city from which the group first declared the establishment of its so-called caliphate.

Since then, ISIS has gradually lost its other Iraqi cities -- Ramadi, Tikrit and Falluja -- to government forces. About 1 million people are estimated to remain in Mosul, once a cosmopolitan trade hub of 2 million residents.

ISIS distributed leaflets Wednesday evening to residents, demanding they hand over their mobile phone SIM cards and remove all antennas from the roofs of their homes. ISIS representatives will collect the SIM cards over the next 24 hours, according to the leaflets. Anyone who fails to comply will be arrested, the leaflets claim.

ISIS has release a slew of propaganda videos over the years from cities under its control, and often showed Mosul as a bastion of peace and order under its rule. But residents who have fled the city say they lived a life of fear.

Those who have managed to flee are now telling their stories, offering a rare glimpse of what life was like in the city under ISIS.

"In the beginning it was alright," Ibrahim, from Mosul, tells CNN's Ben Wedeman near Mosul, refusing to show his face or give his full name out of fear ISIS will find him.

"But then they started ordering around and killing people. Everyone is afraid of them."

Iraqis who were once swayed by the slick productions that ISIS posted on social media soon learned of the privations and violence that permeated the cities that the group occupied.

"From the outside it looks nice," says Salim, another refugee. He's waiting for security clearance from Kurdish security officers in the Debaga refugee camp, south of Irbil -- everyone coming from ISIS-held territory is suspect.

"But in reality, it's a life of fear and hardship."

'The Iraq of tomorrow'

In Paris, French President Francois Hollande reiterated the importance of keeping civilian casualties to levels "as low as possible," during a speech at a meeting on the future of Mosul.

A unit of what appeared to be US special forces advisers entered ISIS territory with the very first armored convoy of Peshmerga on Monday, a CNN team observed. It followed a dozens-strong unit of Kurdish armor that was bound towards ISIS positions, placing American forces right at the front of the opening moments of the fight to retake Mosul.