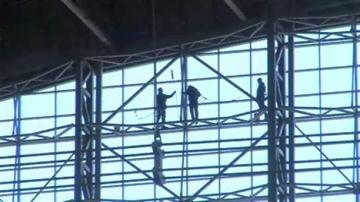 MILWAUKEE - With their home opener in one week, the Milwaukee Brewers are getting ready to welcome fans back to Miller Park.

It's not easy getting the park ready for opening day.

There are events planned all week long to show what it takes to prepare and it's not an easy task.

Window washers have to go to extreme heights inside the park to clean the glass. Other workers have to power wash the more than 41-thousand seats.

Brewer executives know fans are ready for baseball after the rough winter.

Ryan Bruan's suspension for using peforming enhancing drugs made national headlines. Injuries also plaugued the team and it finished with a losing record.

He said ticket sales for this year are strong too.

\"I think fans sort of separate. They look at what Ryan Braun did and they're not happy with what he did. Some are willing to forgive. Others are willing to take a wait and see, but they all love the Brewers,\" said Schlesinger. \"And they respect what we're trying to do as an organization. They're fans of the Brewers.\"

The Brewers take on the Atlanta Braves on opening day, March 31.

And along with thousands of fans, Hank the Dog will also be at Miller Park to cheer the team to victory.