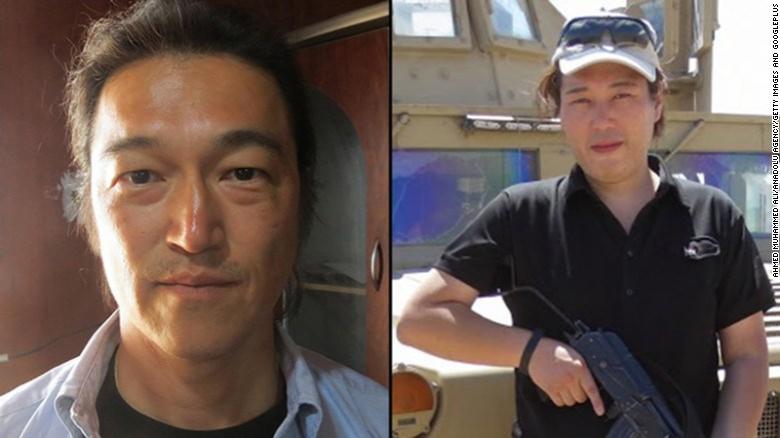 (CNN) ISIS appears to have beheaded one of its Japanese hostages -- and now, an online post is making a demand for sparing the other.

A video file posted online Saturday by a known ISIS supporter shows an image of one hostage, Kenji Goto, holding a photo of what appears to be the corpse of his fellow captive, Haruna Yukawa.

The voice of a person claiming to be Goto speaks over the image, saying in English that Japanese Prime Minister Shinzo Abe is to blame for Yukawa's death.

\"You were given a deadline,\" he says, referring to ISIS' earlier demand that Japan pay $200 million by Friday to save the lives of the two hostages.

The voice then announces a new ultimatum: the release of Sajida al-Rishawi, an Iraqi woman facing the death penalty in Jordan for her role in a series of bombings in 2005 that killed dozens of people at hotels in the Arab kingdom.

Abe condemned the apparent killing of Yukawa and called for Goto to be released immediately.

\"Such act of terrorism is outrageous and impermissible, which causes me nothing but strong indignation,\" he said.

Experts are analyzing the video, which seems \"highly credible,\" Abe said, an assessment shared by U.S. authorities, who said they had no reason to doubt its authenticity.

But the Japanese leader declined to comment on how his government would respond to the new demand.

\"I would be surprised if the Jordanian government or Japan really pushed forward and released this female suicide bomber as ISIS has requested,\" said CNN global affairs analyst David Rohde, referring to al-Rishawi, whose explosives failed to go off in the hotel attack in which she participated.

After ISIS released the first video of the hostages Tuesday, Japan set up a crisis center in Jordan and said it was trying to communicate with the militant group through third parties, such as governments in the region and tribal leaders.

Japanese officials declined to explicitly rule out paying a ransom but said they wouldn't yield to terrorism. They stressed that an aid package Abe had pledged to countries affected by ISIS, cited by the militant group as the reason for the huge ransom demand, was only for humanitarian purposes.

But the Japanese efforts appear to have failed to save Yukawa, 42, whose father was struggling to come to terms with the news.

\"I still don't want to believe it,\" Shoichi Yukawa told Japanese broadcaster NHK, his face not shown in the report. \"If I can see him again, I'd like to hold him in my arms.\"

Goto's mother, Junko Ishido, had made an emotional plea Friday for the release of her son, saying he isn't an enemy of ISIS.

\"Kenji always has been a kind person ever since he was little,\" she said. \"He was always saying, 'I want to save the lives of children in war zones.'\"

Goto, 47, is an experienced freelance journalist who frequently reported from war zones. He met Yukawa, who had dreams of setting up a private security firm, while they were both in Syria last year, according to friends.

After Yukawa was reported to have been captured in August, Goto apparently decided to leave his wife and young child in Japan to go into ISIS territory to try to extricate him.

\"I asked my son's wife why he had made this decision, and the response was that my son felt he had to do everything in his power to help and rescue his friend,\" Ishido said.

But rather than save Yukawa, Goto ended up becoming another captive in the hands of a brutal militant group that has slaughtered countless Iraqis and Syrians, as well as three Americans and two Britons.

Obama and Abe talk on phone

Obama offered \"condolences for the murder\" of Yukawa by ISIS and conveyed \"solidarity with the Japanese people,\" according to a statement.

Obama had condemned the killing in an earlier statement Saturday, saying the United States will work with its ally \"to bring the perpetrators of these murders to justice and will continue to take decisive action to degrade and ultimately defeat\" ISIS.

British Prime Minister David Cameron said the apparent beheading of Yukawa and ISIS' threats are \"yet another reminder of the murderous barbarity of these terrorists.\"

He suggested Japan was right not to bow to the terrorists' demand for ransom, saying that \"Britain strongly supports the firm stance Prime Minister Abe and his Government have taken.\"

The United States and Britain both refuse to pay ransoms to terrorists. But other countries, notably France, have reportedly spent tens of millions of dollars on the release of hostages held by Islamic militants in recent years, despite denying it publicly.

Japan has also paid kidnappers to free its citizens in the past, according to The New York Times. In 1999, Tokyo handed over $3 million for the release of four mining experts held in Kyrgyzstan, the newspaper reported.