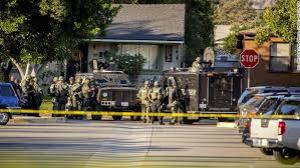 Azusa, California (CNN) -- One person was killed and two others were wounded in a shooting Tuesday afternoon near a polling location in this city near Los Angeles.

Earlier Azusa police had said they were looking for a female suspect, but Corina told reporters at a nighttime news conference that there was no evidence of another shooter.

Police were searching yards in surrounding homes just to be sure there were no other victims or suspects.

The initial shooting was followed by a gun battle with responding police officers at the scene across the street from the Memorial Park North Recreation Center, where voters were spooked by a volley of shots.

Acting Azusa Police Chief Steve Hunt said police arrived around 2 p.m. and found multiple victims on the residential side of the street, across from the polling place. Three people were taken to a hospital, where one male victim died.

Corina said two women who were shot were in critical condition. One was shot in the face and the other was hit in the torso, he said.

A rifle was found near the suspect's body, Corina said. Police couldn't say whether the suspect shot himself.

Police said they didn't yet know the identities of the slain victim or the suspect.

Corina said investigators have ruled out any connection to Tuesday's elections.

Two schools were on lockdown for hours and the polling center, along with another nearby, were "impacted," authorities said.

Two voters who were inside the Memorial Park North Recreation Center when the shooting occurred spoke to CNN on the condition of anonymity. The shots were not fired inside the polling station, witnesses said.

One voter says he was inside when he heard a bunch of shots ring out and people from outside starting to run in before officials locked the doors. He told CNN a "massive shooting is happening and the police have told us to stay indoors. We are currently on lock down."

Another voter told CNN she heard the shots ring out.

The scene inside a polling place Tuesday afternoon in Azusa, where voters said they heard gunshots.

"At first, I thought it was construction but people came running into the room saying they see a guy with a bulletproof vest and a white shirt. As of right now, they just have us in the voting room and are trying to keep us calm," she said.

Officials were not allowing anyone to leave the building but people were still being allowed to vote while they waited, the woman said.

Pictures sent to CNN from inside the polling station showed many people inside, including a group of children who were in the building when the shots were heard.

The woman estimated about 30 people remained inside the locked-down polling location. About 15-20 children were evacuated from a gym inside the recreation center where people were voting, she said.

Eventually, all the voters were evacuated and some were directed to other sites where they were allowed to vote.

"Voters should avoid the area and, if necessary, cast a ballot at an alternate polling location," LA County Registrar Dean Logan tweeted.

Asuza, a suburb 27 miles northeast of Los Angeles, is home to an estimated 45,000 residents.