One person arrested during protests at City Hall 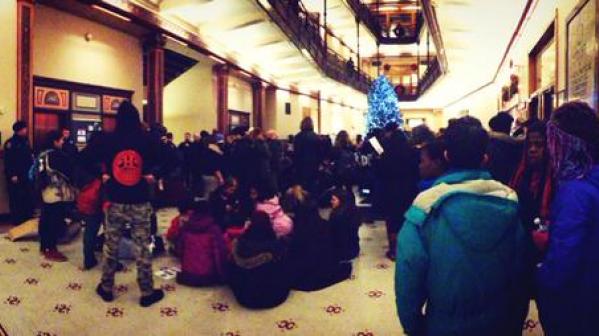 Milwaukee Police confirm that a 29-year-old man has been arrested tonight for disorderly conduct as dozens of protesters spilled into Milwaukee's City Hall.

The protesters marched in support of Dontre Hamilton, a man who was shot 14 times by Officer Christopher Manney on April 30.  Manney is no longer a member of the Milwaukee Police force.

Many protesters are members of the Coalition for Justice and students from UW-Milwaukee.  They marched to city hall from Red Arrow Park shortly after 4 PM with plans to speak with Milwaukee Mayor Tom Barrett.

Barrett had previous obligations and was not at city hall when protesters entered the premises.

Police officers blocked the elevators and stairs when protesters arrived.

\"The medical examiner said any one of these bullets-- would have killed him,\" said Nate, as he addressed demonstrators during the sit-in.

Dontre's mother, Maria Hamilton, in tears as the details are revealed to supporters.

After releasing information from Dontre's autopsy, the Coalition for Justice passed out citizen complaint forms, so protesters could express their grievances toward Milwaukee Police Department.  One protester, who happened to be a notary, stepped up to notarize each complaint, so protesters could submit their forms at city hall. .

The demonstration didn't end with supporters of Dontre Hamilton putting pen to paper.  After 5 PM, protesters who stepped out, couldn't re-enter the building.  Protesters left inside chanted \"let them in,\" as officers blocked the doors, some vowed not to leave city hall until they could address city officials.

Protesters remained at city hall for several hours until Nate Hamilton received a call from Mayor Tom Barrett.  The Hamilton Family is expected to meet with the mayor later this week.

District Attorney John Chisholm is still reviewing the case and has not decided yet if any charges will be filed.