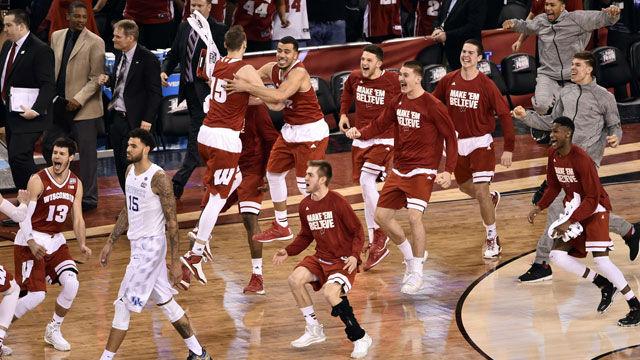 One could argue that Saturday night's 71-64 win by Wisconsin over Kentucky in the National Semifinal is the biggest win for the Badgers basketball program in more than 70 years. Wisconsin won a national title in 1941, but haven't not been back to the championship game since.

Frank Kaminsky scored 20 points and added 11 rebounds, and Sam Dekker hit the go-ahead three pointer with a minute and a half to play as Wisconsin did something no team has done all season - topple the previously undefeated Kentucky Wildcats.

Kaminsky and Dekker hit key shots in the first half to put the Badgers up by 9, but the Wildcats rallied to tie the score at the half. Bronson Koenig scored 12 points and hit several memorable shots, including an outside shot at the first half buzzer to knot the score.

A 9-0 Wisconsin run included another Koenig three and gave the Badgers an 8 point lead with less than 15 minutes to play. But again, a talented and athletic Kentucky squad rallied back to take the lead at the 7:47 mark of the second half.

But in the final five minutes, it was Wisconsin, everybody's favorite underdog, who shone in the spotlight while Kentucky wilted, incurring shot clock violations on three consecutive possessions. Nigel Hayes barely beat the shot clock with a layup to tie the game at 60 with 2:34 remaining, and Dekker buried a three to put Wisconsin ahead to stay less than a minute later.

The Badgers will play Monday against Duke for the NCAA men's basketball championship. The Blue Devils trounced Michigan State in the first game of the evening, a matchup that seems more like the undercard to the Wisconsin-Kentucky bout.

The Badgers and Duke will tip off at 8:18PM Central Time Monday. CBS 58 will carry a Tipoff To The Championship Game special before network coverage begins.